“Has anyone driven all the way down from Sheffield this morning?” asked the race organiser as 23 runners lined up for the start of the Hopton Court Trail Half (winter edition).

Backtrack to Friday lunchtime. I was feeling like my 2020 racing plans were cursed. I’d been too ill to run the Meltham 10k, the Bradfield Bash had been cancelled and now the Cannock Chase 10 mile was postponed because of the weather! To top it off, I’d been sick twice on my attempt at a training run that morning, thanks to the after-effects of some antibiotics.

I had the right hump.

As soon as I clocked off for my lunch break, I was scouring the internet for something that was still on. It pretty much came down to Doctor’s Gate or Hopton Court near Kidderminster. Hopton Court had a DY postcode prefix, as do my aunt and uncle in Dudley, so I decided I’d combine a race and a visit.

I left the house just before six on Sunday morning, and set off down the M1 trying not to hear the “amber warning, don’t drive unless absolutely necessary” messages on the radio. At 7:10 I pulled over to check the promised 7am course inspection hadn’t changed the organisers’ mind, but there was nothing in my inbox, so on I ploughed, down increasingly narrow lanes into the beautiful Shropshire countryside.

Venue found, registration done, portable toilets (brand unknown) tested, and after some vacillating about whether to run in a waterproof (I’m glad I didn’t), it was off to the start and my personalised welcome. I wasn’t the only long-distance traveller either: the woman stood next to me had driven up from London when her road race in Kent was cancelled.

The course was four laps of a 5k loop, with a little mini-loop tacked on at the start to make up the extra distance for the half marathon. There were 5k and 10k races taking place as well, with the start half an hour after the half.

We set off down a small hill and into a field, where we were running across the gradient and I was immediately in bother. The soil in Shropshire is a very pretty brick-red clay, and the overnight rain had turned it into a kind of greasy margarine. We slithered our way across, then onto the extra loop – a slightly easier uphill and a flat, rutted path with lots of standing water. Then we went down the hill and did it again before getting back on to the course proper. The 5k lap itself was a good mix of climbs and descents. After that initial across-the gradient scamper and uphill push, there was a fast descent across a field to a tricky sharp right and downhill into some woods before a stream crossing and a very slippy climb to another field, which ended in a sharp turn and a ford that I was too nervous to go through on the first lap (there was a footbridge to one side). Then there was a stinker of a little climb, before the worst of it was over. and it was a belt downhill into the wind, dodging a sinkhole, a bog and a cattle grid, to the end of the lap.

Lap 1 was hard. I haven’t done a lot of off-road running over the winter, and I was sliding around all over the place and making very heavy weather. Near the end of the lap I caught up with someone who appeared to be wearing road shoes, and had clearly fallen. I think she dropped out at the end of that lap.

By lap 2 I’d found my mud-legs, and I felt properly well for the first time in at least a couple of weeks. I powered through the ford and overtook a couple of half-marathon runners, and passing some of the 5k and 10k runners gave me a morale boost (as did their friendly shouts of encouragement). Lap 3 was similar. The wind was getting up a bit, but I still felt good.

Lap 4 was a sod though. Ten miles on mud is a lot more than ten miles on tarmac, and I was feeling my lack of fitness. The shorter races had finished, and apart from one of the marshals who was running in the wooded section, I spent three miles pretty much on my own. I started to run low on fuel as the rain and wind picked up, and my Strava trace shows that my pace was getting very ragged. I stopped to eat a gel but it didn’t make much difference. I finally got over the top of the hill, pelted as best as I could to the finish line and collected my medal. I don’t care what you say, I like a medal.

Half a cup of hot cider and a Nutella crepe later and I was back in the car and away, adding yet another layer of regional mud to the rich tapestry of the footwell carpet.

I really enjoyed my day out in Shropshire. My only regret is that I didn’t have a bit more in the tank for lap four, because it turned out I was only a couple of minutes behind two other runners. The conditions were challenging because of the lack of traction, but it never felt dangerous and this is probably a pretty fast course when they run the summer version of the race. I’ve not done any cross-country racing, but it did remind me of the cross-country course we used to have to run round every week before outdoor games at school. The cheapo 1980s football boots I wore then might have managed better than my swanky trail shoes on this terrain. Fell shoes next time! 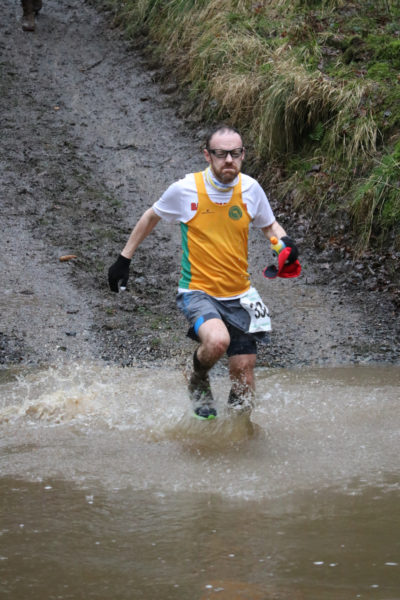