“If you’re a burglar, get thissen over to Sheffield – there’s no bugger there at the moment.”

These were the compere’s introductory words, uttered as we gathered in the reasonably swanky surroundings of Huddersfield Rugby Union Club’s bar for the Huddersfield 10k prize-giving ceremony. I looked over at fellow Strider (and race winner) Joe ‘check out my vaporflies’ Sweetnam-Powell; he was supping a celebratory pint of something alcoholic yet revoltingly purple and eating the bulk of my post-race snacks while thumbing through the bundle of notes that formed the prize money he’d just been presented with. Liam Walker was next up, having taken second place. In fact, Striders dominated proceedings across pretty much every category – a fact not lost on the officials, who managed to sound only partially narked every time a Strider came forward to collect their plunder (when a Holmfirth runner picked up a prize, those gathered were encouraged to give the ‘local runner’ a particularly loud round of applause).

Let’s not forget; we were in Kirklees, the kind of place where entertainment and excitement means a shambolic butchering of something Agatha Christie-ish by the local amateur dramatics society. Three hours earlier we’d trundled over the low Pennines via the etymologically preposterous Flouch roundabout, one eye on the road watching out for floods following the Noahic rains of the preceding days, the other on the lookout for small groups of scruffily-dressed old men riding in a bathtub on wheels and clearly up to no good (my travelling companions, the significantly more youthful Seth Kirby and the aforementioned J S-P were – mercifully for them – less familiar with the ‘hilarious’ Sunday teatime escapes of Compo et al in Last of the Summer Wine). As we descended through attractive villages which seemed sleepily unaware that the era of the steam train had ended, I half expected to be hailed by a flat-capped boy on a boneshaker, delivering freshly-baked loaves as Dvorak’s New World Symphony (or ‘the Hovis advert’, for those less keen on Radio 3) harrumphed along brassily in the background.

We soon fell into a regular pattern; J S-P would identify a steep road, at roughly 8 o’clock to our direction of travel and rising to join us from the valley bottom, and confidently pronounce it to be ‘where the course re-joins the main road’. Roughly 30 seconds later, a similar-looking road would be identified, and a reassessment made. Things continued along these lines until slightly more reliable indicators – marshals and kilometre markers, for example – appeared. This, coupled with my comprehensive navigational notes of ‘turn left after the Shell garage’, soon found us trundling through the flooded potholes of the race car park (where, Time Team fans will be disappointed to learn, ‘any unauthorised archaeological excavations will result in prosecution’).

As there were only 45 minutes until the start of the race, and I’d forgotten my trowel, we decided to forego the possibility of discovering a priceless Anglo-Saxon hoard and head inside to collect our race numbers. It soon became apparent that this was a Striders takeover, with many members looking to get some early points on the board in the Road Race League, and the obligatory pre-race photograph had to be re-taken numerous times as a steady stream of green-and-gold emerged from the warmth, ready to face the elements. J S-P had taken himself off (sans vaporflies) for a more focused warm-up than that which Loz Harvey and I undertook (the less thorough ‘going to have a look where the first hill is’), and I then I found myself in a battle with my watch, which had decided it was retiring from its role as a GPS device in favour of a less stressful life as a glorified egg timer with no need to be constantly gazing skywards. Consequently, the start of the race took me by surprise, and I spent a frantic first kilometre jostling for position as we bottlenecked out onto the main road, cutting in front of other runners and generally making myself unpopular. After a kilometre or so, the crowd had thinned, and the lead runners – three Striders amongst them – were disappearing into the distance. Time to formulate a race plan, I thought to myself, displaying the kind of temporally-backward strategic thinking that in the animal kingdom would result in being eaten by something larger and with sharper teeth. I decided to go with the old chestnut, ‘don’t let anyone overtake you’. If I did that, I calculated with a quick glance ahead, I’d cross the line in 8th.

Some of the pre-race banter had centred around the course’s gradient profile, and how anything under 40 minutes could be considered a very fine achievement indeed (that, and how Hull makes for a disappointing city break, which I’d discovered earlier that week). Battling up and down the hills, the streets awash with gallons of Storm Dennis run-off, it became apparent just how impressive the course record of 32:28 (set in 2013) really is. A few hardy souls had gathered in places to watch the action unfold, but it was becoming a rather lonely affair, my only company being the runner about 50 metres ahead in 7th place who was, rather rudely, not slowing down to let me overtake him. We flew down steep descents, then were thrown immediately into brutal uphill slogs, the attractive semi-rural surroundings passing by in a blur, unappreciated. As we approached the crest of the third steep climb, I came as close as I’ve ever come in a race to dropping down to walking pace. I could hear footsteps behind me. Do I have enough to hold onto my position, I wondered.

I was saved by the surge of adrenaline I received from my annoyance at a pair of marshals at the top of the hill, who had turned their back on the course and had joined in a conversation with some locals. I noticed that we were at an intersection of several roads.

‘Excuse me – I’m terribly sorry, but could I trouble you for some navigational information?’ I asked. At least, that’s what I might’ve said (albeit laced with a healthy dose of sarcasm) had I not been at the point of chest-rattling, ragged-breath exhaustion. What came out was more like a garbled, ‘Whichwayzit?’, which, to my delight, was met with an arm waved in what appeared to be a downhill direction. Following a main road still open to local traffic, we began the final steep descent. I free-wheeled down the wet tarmac, my feet flapping and slapping like one of those push-along duck toys, and into a mercifully short final climb (which turned out to be the 8 o’clock that J S-P correctly identified on what was probably the 73rd or 74th attempt). As I passed the 9km marker, I looked at my watch. If I could manage a sub-4-minute kilometre, I’d dip in at under 40 minutes.

I passed the Shell garage…. Turned into the minor road leading to the rugby club…. Only a few hundred metres to go…. And then he appeared on my shoulder. Spurred on by a vociferous crowd of two, the 9th place runner put on a burst of speed to pass me at the ‘100 metres to go’ sign. He must’ve been motoring, as I covered my final kilometre in 3:30, but as with the Ackworth half last year, I found myself pipped at the post for the coveted 8th position. After we’d crossed the line, I offered him a grudging ‘great finish, mate,’ then went inside to wallow in my total lack of perspective.

Inside, I discovered J-SP and Liam Walker, basking in their respective 1st and 2nd places. Philip Cooper (fortunately for him, and contrary to circulating rumours, not my twin) had secured 5th place. (In another Cooper-related aside, the runner who overtook me for 8th was called Gary Cooper. A solid run for an actor who’s been dead since the early ‘60s.) Looking at the rapidly-turned-around results list revealed that across the field, many Striders had put in an impressive showing. Congratulations to everyone who ran; it was a tough course and difficult conditions.

My sense of reason was restored when, to my surprise and delight, I picked up a prize in my age category. Which brings us neatly back to where we started – Striders dominating the world (well, Kirklees, at least).

(these 3 took 1st place in the men’s team event) 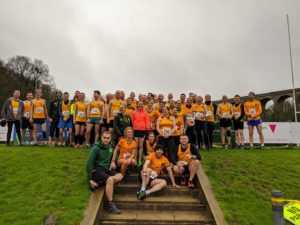