The Alan Kirk Memorial Lad’s Leap fell race took place on Sunday 15th March 2020.  It’s a 5.9 mile race with over 1700ft of ascent, starting from Crowden Campsite over near Woodhead.

I hadn’t been looking forward to this race.  The reason being that I was doing the Grindleford Gallop on the Saturday and had only entered the Leap due to it being the second race in the Striders Fell Champs this year.  May as well get 10 points for turning up, I’d thought!

The race had a respectable 11am start and I arrived with my buddy/supporter/taxi-man Kev in good time.  I quickly registered, then we parked ourselves at a picnic table and had a coffee.  It wasn’t long before the RD had roped Kev into carparking duties as he went to put flags on the out and back – ‘back in 2 mins’, he’d said.  Half an hour later, he reappeared!

Then the rain started, so we headed back to the car and I got ready to run.  I wasn’t feeling too bad considering – a bit achey with tight calves.  I did a bit of jumping around on the spot to warm up, and before long we were assembled at the start.  The rain had stopped by now.

Off we went, 118 runners on a short sprint round and across a slippy wooden bridge to the base of a great big hill.  So up we went.  I had never intended to try to run uphill so I settled into a fast walk about 3/4 of the way back.  It was a pretty tough climb, tough on the legs and tough on the lungs.  It eased off in a couple of places then up it went again.  A few hardy supporters cheered us on, and one of the two course photographers snapped us from the shelter of a stone wall.

At the top, we faced about a mile of track which wound through marsh and proper black peat bog.  You were never really sure how far down your foot was going to go.  It was pretty wild up there and I loved it, despite my fatigued legs.  The views to the south, over the reservoirs of Torside and Rhodeswood were pretty spectacular.

Before long the descent started.  I love a good descent and this was not to disappoint.  In fact the only bad thing about this descent was the thought, as I flew down grinning, that I’d soon be coming back up again!  Towards the bottom we ran in a small loop before rejoining the same path again.  This meant that I saw a few Striders heading back up, but not all of them.

Back up again.  I settled in for a speed-walk, knowing that running was not an option for me.  It worked and before long I was back on the top and had to kick-start myself into action.  You know that feeling where you know you should be running again but you kinda don’t want to?  And then you do and it feels ok.  It did feel ok.  I dug in tactically behind fellow Strider Abigail and adjusted my path as she got partially swallowed in places by the relentless bog.

After a few minutes myself and another runner craftily overtook the male runner steps ahead of me.  We went round a ridge in the direction what I think is the Lad’s Leap itself and one wrong foot saw the guy fall down the steep slope to the left, clinging onto the top!  My heart stopped temporarily, I grabbed his hand and pulled him up.  ‘All part of the fun’ he said, thanked me and was on his way!

The final descent was in sight and now I was really enjoying myself.  The limbs felt great, the ground was so soft and I was on a high.  I had my Mudclaws on and I felt safe.  All I had to do was really concentrate going down and I could overtake a couple of runners on the way.  I did.  I ticked them off, one, two, and then focused on a guy in blue further down the slope.  I closed the gap quite considerably but couldn’t catch him.  We were down.  Across the slippery bridge and along the road, grinning all the way to the finish.

I crossed the finish line with the other Striders cheering me. They’d been there for some time, but I had nothing to be ashamed of.  I’d started, I’d finished, and I’d had great fun.  Unfortunately the rain then started coming down in force so any post-race camaraderie was rudely halted and off we all went.

First across the line was Rob James of Royston Road Runners in 50:49.  First lady was Julie Darigala of Penistone Footpath Runners in 01:01:46. 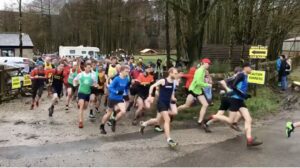