In early 2019, Richard ‘Peggy’ Pegg posted a video on the Striders Facebook page of how a severe storm meant that his trip to Malta to participate in their marathon had been a frustrating one; the marathon and associated races had been cancelled as the island suffered extreme weather. As I recall, this didn’t frustrate Peggy too much, never one to waste an opportunity he ran the course solo I think the following day !

It sowed a seed in my mind, my employers have a small office in Malta which I visit occasionally and would I be able to cajole & encourage a group of mainly non-runners (certainly non half-marathon runners) from our UK offices to become fit enough to participate in the 2020 race ? A year flies by but with a good bit of fundraising for our work charity combined with commitment and determination from individuals to get themselves fit enough to reach the start line, following a quick dash after Hillsborough parkrun on the Saturday morning, I led a team of 27 runners from my company to run the 2020 Malta half-marathon. (nb. If a group of Striders are looking for a realistic location for a cheapish away half-marathon, flights are c.£70 return, decent hotels in out of season are a good price, food / drink is very reasonable and booking the race in advance can be done for c.25 euros)

Given the Coronavirus issue, the communication from the organisers in the weeks before the race was almost daily. Malta doesn’t have a single case currently and they want to keep it that way naturally. Runners who had visited a wide range of countries recently were told that regrettably they now can’t run and passport details etc. were checked again when collecting race packs. This race does take a bit of organising, with a different start & finish location as well as a marathon, half-marathon & walkathon (half marathon but walking), all taking place on the same day with parts of it on the same route.

Sunday morning came, the sun was out & it was warming up as we arrived at the finish line in Sliema. This was to collect the one-way coach taking us to the start line, in the medieval (8th century) city of Mdina. All very seamless, hand in your ticket, jump on & you’re off. Race bags were deposited in DHL vans at the start line for transporting back to the finish area. I looked out across several thousand runners, there must be some more green & gold somewhere ? I chatted to a group from Ackworth Road Runners who had made the trip. ‘seen any more Striders ?’ I enquired, negative was the reply !

9:15am on the dot we started, brass bands were playing in the start area (a feature of this race is that almost every half mile a band or live music of some description is playing, which helps …..I think). After a very short climb, the run decends out of Mdina and heads in an easterly direction through largely empty farmland & past the occasional house. The owner sat outside, shouting encouragement (I think it was encouragement !) enjoying a morning glass of something stronger than coffee. Despite a bit of congestion at the start, I somehow had covered the first 5k in 22 minutes – on the basis that I had hoped for a sub 1:45, this was well ahead of my schedule. I knew I was going too fast for my own good……but what do you do ? Sit down, have a drink and enjoy the music until you’re back on pace ? I decided to carry on and just see what would happen. 10k came and went (46 mins) and into Valetta the capital.

At this point, we caught the first glance of those in the full marathon race which had started c.2 hrs before the half marathon. The weather was now becoming very warm, no clouds at all and whilst it may have been 21 in the shade, in the open road it was more like middle 20’s. The water stations, sponge stations, isotonic drink stations and even one handing out quartered oranges were well placed at roughly 3-4k intervals and gave opportunity for refreshment but drinking & running at the same time is not something I am skilled at. I’m sure that there is a trick to it but after a few sips, I have to throw the water bottle aside each time.

I could feel my pace slowing, this was confirmed by my watch, the 7-8 minute miles were now being replaced by 8-9 minutes despite the largely flat route – there are certainly more downs than ups. At one point early in the race I had thought that a 1:40 may be possible but now 1:45 was looking a struggle. 5km to go and the last part of the run is around the coast. Very expensive boats bobbing up & down are the order of the day – or so I am told. To be honest, I don’t remember much about this – survival and finishing is what was on my mind. The heat had affected me, I hadn’t taken on enough fluids and in the distance the finish was spotted and that was all that was on my mind – my last 10k being almost 9 minutes slower than my first 10k.

I crossed the line in 1:46:31 which in reality, I should be happy with all things considered. It certainly is a fast course when the sun isn’t as strong as it was and I’d do it again. Water & other drinks, fruit aplenty were handed out after the run, along with a rather weighty medal. There is a t-shirt hopefully on its way somewhere, the international runners had to go without with ours being an output of restricted shipping from China.

The group from work did superb, everyone completed it in times ranging from 1hr 20 (a good runner from Hull !) to c.2hrs 30 and hopefully, through occasional runches we’ll grow the group…….early talks are taking place for a 2021 visit and if not to Malta, certainly another trip – running brings people together (as we know) and from a team-building exercise, the after race chat and comradery between people who didn’t really know each other that well before the trip, was great to see.

2991 people participated in the half marathon. 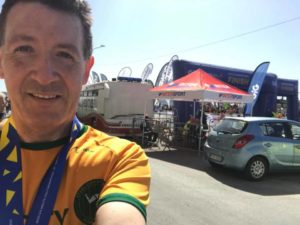