A bright and chilly morning dawned on race day for the Meltham ‘Tough’ 10k. The name comes from the hilly nature of the course, added to (for me, at least) by the cheery disclaimer on the website of “We had two reported cases of hypothermia in 2014 so please dress according to the conditions”.

And so, layered up until I resembled some kind of cosy little windproof onion, I headed into the hall of Meltham Community Sports Centre to collect my number. Now I’ve only been a member since last May, but I’ve become accustomed to being greeted by a sea of green and gold at all the races I’ve attended so far. Not so at Meltham where I was the lone Steel City Strider! Notably, a local club the Holmfirth Harriers also wear gold vests, leading me to get very excited very frequently only for me to realise there was no snazzy green stripe in sight.

I wasn’t quite sure what to expect or aim for from this race, and was treating it more of an undulating training run for the upcoming Sheffield Half. I decided I’d be happy with beating my pre-Striders flat 10k time of 63 minutes – I’ve only run sub 60 twice since, and both on flat courses, so this seemed a reasonable target.

After a brief and uplifting start line pep talk from the race director, warning us all again of those hills, we were off!

The course began with what I found to be by far the most difficult of the climbs, with each corner a false summit over the first few km, before it levelled out a little and set off over the moors.

Downhill into Blackmoorfoot was a welcome relief, and a descent I’m sure I would have enjoyed more had I not been very aware that I had to go back up again!

It was as I began to climb again around the 5km point that the heavens opened. Driving rain, squally winds and occasional hail was to be the theme of the second half of my race… I couldn’t help but be jealous of the fact that the race leaders probably avoided getting wet! As a glasses wearer, the rain is a bit of a game changer, largely obscuring my ability to see (but still safer than taking them off!). So whilst I’d love to tell you about the atmospheric views over the West Yorkshire moorland, unfortunately everything was a little foggy through my eyes!

Aside from the unavoidable terrible weather, the only other thing I did not like at all about this race was the fact we were running on non-closed roads with no pavements. The marshals were plentiful and absolutely super and there were plenty of signs to warn drivers of us runners, so this isn’t at all a criticism of the organisation, but it was my first experience of this sort of race and it really unnerved me to have cars and the occasional truck full of sheep speeding past (I do wonder if this was worse as I was near the back of the field where we were a little more spread out).

My Sheffield legs came into their own on the last climb and I was able to overtake quite a few runners. Maybe the fact I couldn’t actually see distracted me enough from the 7% incline! I have to say I didn’t find this race as difficult as I’d built it up in my mind, and it’s helped me feel much more confident about taking on The Hill in the half! The last 1.5km is a total downhill treat too (with a sneaky little uphill sprint from 6 miles), so I managed a nice fast finish.

I was absolutely astonished to cross the finish line only 22 seconds over an hour, I’m slightly irritated by that third of a minute now but definitely surpassed my own expectations! All finishers received a nice reuseable coffee cap, which I grasped proudly in my sodden mitts before heading back home.

There were 365 finishers altogether, and the race was won (for the second year in a row) by Gareth Cooke of Penistone Footpath Runners in 35.35, with first lady being Helen Roby of Longwood Harriers AC in 41.49. First* Strider across the line was Laura Rangeley in 1.00.22.

*Yes, I was the only one, but I feel this is a rare opportunity for glory so I’m going to grab it with both hands!

Full results can be found at https://www.ukresults.net/2020/meltham.html 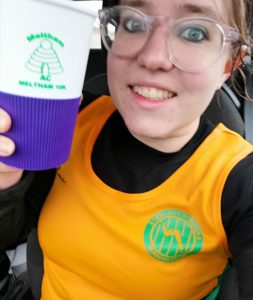