The Northumberland Coastal Ultra is part of the Coastal Trail Series of events staged by Endurance Life. As in each of their events, there were 4 races on the day – a 10k, half marathon, marathon and ultra-marathon.

This was my second ultra – and at 35.2 miles and 1300 ft it was a bit longer but a bit less hilly than the first. Being the second Saturday of half term, it provided a good opportunity to base a family holiday around it, and so we booked a week in Craster, a small village at the 14 mile mark, and also the half marathon start point.

I’d been keeping an eye on the weather in the weeks building up to the big day, and was pretty happy when Ciara came and went, and then so did Dennis….surely that was it? But no, storm Ellen arrived on ultra-weekend and, while Northumberland got off lightly compared with the south-west of the UK, the forecast for the day was cold and very windy.

Registration for the event was in Bamburgh, where the event finish was, and after arriving at a cold, dark gazebo at 6:30am, followed by a thorough briefing, we were all bussed down to Alnwick to the start. It was getting light and the sunrise was amazing. The weather was still, and there was a rainbow to the north. It was the first of many rainbows that day. Despite the calm and serenity there were ominous blue/grey clouds is the distance, together a with a feeling that there might be snow.

The marathoners were to start 1 hour after us, so it was only ultra-runners on the first buses. I was sitting next to some girls who were happily chatting about the likelihood of them completing the Spine race before their 40th birthdays. I got that feeling of not belonging that I’m sure many of you are familiar with. But no time to dwell on that, before long we were off the bus and in a field, with Alnwick Castle to the South. There was a spot of drizzle but it was still a beautiful morning.

I was feeling pretty good – not too many pre-race nerves – and I was trying my best not to think too hard about what I was actually doing. I just needed to enjoy the moment, and stick with my plan as much as possible. I’d set myself an aspirational goal of 6 hours, but I’d allow myself to finish within 7 without being hard on myself, I’d thought. So 10 minute miles was the pace I had in mind.

After a short briefing we were counted down from 5 and off we went, an easy run through fields and tracks towards the coast and the first village of Alnmouth, CP1. I found it hard to pace myself in these first miles. I had my second feeling of ‘not belonging’ when I tucked in behind a guy who had Marathon De Sables tatooed on his leg. In a way though, this helped me to realise that I was running my own race…it was a challenge to finish, not to compete, and from then on I focused more on the plan I had made for myself.

After Alnmouth, the route followed the coastal trail north, past the villages of Boulmer and Howick and on towards Craster. The wind had started to pick up but it was still fairly sunny. There was a short stormy interlude resulting in the obligatory faffing with the waterproof jacket , and the inevitable stopping of the rain immediately following the donning of said jacket. I ran into Craster, 14 miles in, bang on schedule and in sunny and breezy conditions.

Our holiday house in Craster was right on the route, and I dropped in for a quick pit-stop – toilet and water refill, before being waved off by my family in the direction of the very atmospheric Dunstanburgh Castle. The half marathon was not far off starting, and I had many words of encouragement from the runners who were waiting to start their own race. I had a feeling, at this point, that I was quite near the back of the ultra-group, a lot of them having passed while I stopped off at Craster. I decided to try and make up some time before CP3 at 19 miles, and in actual fact arrived 5 mins ahead of schedule. I was back on track.

From then on things took a turn for the worse. I was starting to feel very tired and the wind was picking up quite considerably. The track was, and had been from the start, quite undulating, though dunes and on and off beaches. We did a short spell on a beach of soft sand, which was just soul-destroying. It was around this time that I thought ‘stuff the pace, I just want to finish this thing’. Half marathoners came bounding past with fresh-looking legs and I had leg-envy. What was nice, though, was the number of runners who came past and complimented and encouraged me. Each race distance was identifiable by the colour on the race number, so it was clear to see who was doing the ultra (purple), marathon (green), HM (blue) and 10k (yellow). My spirits were further lifted when, on entering the small town of Seahouses at 24 miles, someone shouted ‘Go Strider!’ Amazing! He was there with who I assume were his two daughters, handing out sweets to passing runners. It didn’t make me run faster – because I couldn’t – but it did make me smile.

I passed through CP4, just under 25 miles, and only 2 minutes over pace. But we were now heading down to the beach towards Bamburgh. There was no sign of the castle yet and the wind was now in our faces. I walked a bit, ran a bit, just did what I could to keep moving. And then, the sun turned to rain and it was miserable. Hood up, tied tight around my face, I pulled out my spare buff and pulled it over my hood to cover my face. My face was frozen, my hands were frozen. I pitied the 10k runners who (also not able to run due to the headwind) had come out dressed in t-shirt and shorts. Fortunately before long the rain passed and my fingers and face regained some feeling. To my right was a magical sight of the Farne Islands bang in the middle of a whole rainbow. I was not recovered enough at that point to photograph it, but it’ll remain in my memory for sure.

The beach veered to the left after a while, and the Endurance Life flag (signalling us to leave the beach) was visible, as was the magnificent Bamburgh Castle. The is where all but the Ultra runners would leave the beach and run South to the finish. I, however, had to turn right for another 9 mile (or so I thought, it turned out to be 10) loop of Bamburgh. For about a mile it was ok. We followed a quiet road for a distance which made for easy running. I ignored the pain and picked up pace. Then, the route headed west through Bamburgh Castle golf course and it all got a little bit crazy. The wind was incredible and a full-on headwind, with gusts strong enough to knock you off your feet. It was almost impossible to walk, let alone run, and this went on for some time. The only place to shelter were gnarly gorse bushes, and I was seriously considering at one point to curl up under one of them. I nearly fell over a couple of times but somehow managed to stay on my feet.

Eventually, the path curved around and headed down and south onto a more sheltered road section, which I shuffled along slowly, walked the hills, running (well, waddling) the flats and downs. I arrived at CP5, 29.5 miles, 20 minutes over pace and gratefully downed about 4 orange segments and grabbed a handful of jelly sweets.

I don’t remember too much about the last section. It wasn’t much in the way of scenery. It was longer than I was expecting (I ran 36.3 miles in total and twice the advertised elevation). I struggle with ITB problems on my right knee on longer races and it was really hurting now. It makes it difficult to bend, and almost impossible to go downhill. So much so that on the one short stretch of tailwind that we had it was all I could do to stay upright, my legs just weren’t strong enough to take advantage. My watch was pinging with messages from my supporters, ranging from ‘you can do it, not far to go now!’ to ‘will you bloody hurry up it’s freezing at the finish!’ Finally I headed down a road to a cold-looking but very enthusiastic marshal who pointed me down onto the beach.

I grabbed my ITB-affected knee and dragged it down the dune to the sand and rejoined the last slog of beach up to Bamburgh castle again. I power-walked into the wind and up towards the flag. I tucked in behind a man who looked to be on his last legs, In fact I wanted to overtake him (which is really saying something the speed I was going) but there was no room. We reached the section where one arrow points to the finish, and the other points right for the ultra. He went right. He still had 10 miles to go, and I really felt for him at that stage. Perhaps he joined the 30 or so DNFs for the day, or maybe he struggled round.

I turned left through the dunes, past a marathoner who was also looking worse for wear. The finish line was close and the only thing stopping me now was my knee. Before long through I was out of the dunes and onto the flat grass finish. I even managed a sprint finish! I dibbed in and my frozen family came over to hug and congratulate me. Following a bit of an emotional moment, I composed myself and went to collect my results, t-shift and impossibly small medal in light of the feat I’d just undertaken!

It had always been the plan that my stepdad, Steve, would take me to the pub afterwards. He asked ‘now, or after a shower?’ but I knew that if didn’t go straight away I probably wouldn’t make it at all so opted to limp over in my muddy gear, race number still pinned to my leg and medal round my neck. This was not to be a mistake. The event had been hard to miss by the locals, and had even been on local TV, so when I walked into the pub I got a real hero’s welcome, including a round of applause! I spent the next couple of hours chatting away and answering questions like some kind of celebrity, while the beer kept flowing (thanks Steve!). All in all, a great end to an, ahem, challenging day.

The race was won by Jethro Lennox in a ridiculous 4:36:21 (he must have missed the worst of the wind!), and the first lady was Charmaine Horsfall in 5:24:18.

I crossed the line in 6:37:54 and appear to have won my category, though this has yet to be confirmed. Clubs are not listed so I’m not sure of any other Striders in any of the races, though I’m wondering if the man in Seahouses may have been supporting one of us? 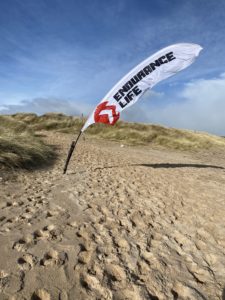