Marking the boundary between London and the rest of the world, Watford is a place most of us only ever pass on the M1 or M25 wanting to get from away as quickly as possible but Watford Harriers do put on an excellent race.

Starting and finishing in Cassiobury Park the route heads north and, for those not in the know, is surprisingly rural as it twice crosses the M25. The route is also a hilly one with a quick downhill start towards the river and the Grand Union Canal, made exasperating by a pacer who has gone off far too quickly. (How do you pace a hilly route because, with the uphill sections, you have to make good use of the downhill parts? ed.) As a cameo of the Sheffield Half, the next six miles are basically uphill before returning to the park. That downhill start also means that the last half mile is uphill.

Our lone Strider was Frances Roberts who, returning to the land of her birth, finished as a creditable 15th woman out of a field of 1357. Victors were Jonathan Cornish (Hercules Wimbledon) 1:07:29 and W35 Annabel Gummow (Winchester) 1:14:50 pb. The race also doubles as the Hertfordshire Vets championships. There is chip timing, t-shirt and medal with plenty of razzamatazz whilst you can also download your race photos from the official photographer for £16.65 (£33.33 high resolution) which is why we haven’t got an action photo of Frances. 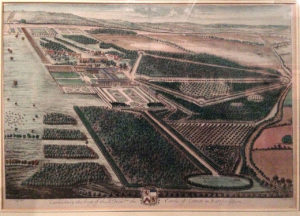 Cassiobury Park 1707 Engraving (Watford Museum)
Appearing in Doomsday as the manor of Casshio and although much munched by urban sprawl the park still has extensive grounds. With a weekly Parkrun (yawn ed.) it also presents itself as a great venue for long reps and fartlek.