The running year started promisingly enough for me with a chilly England qualifying half marathon in Helsby, Chester in January. Being freezing cold I nipped round in 1:43:39 so I could get back to my big coat as soon as my legs would carry me, 1st F65 and qualifier for England International in Fleet in March.

Storm Dennis put paid to my February BMAF 10K Championship in Poole. Then, in March, came the Covid-19 lockdown. The England representation half marathon in Fleet was cancelled and so, month on month was every other race I had planned to do, even the Home Nations Cross Country race in Dublin, the one I was particularly excited about as I learned after Brexit I can claim my Irish passport, thanks to my lovely Irish mother.

With no particular goal to aim for I turned my attention to the offers of virtual races. Lockdown was going to go on for some time. I would need a challenge to get me up and out, running, training and aspiring throughout the spring and summer.

The European Masters Athletics (EMA), posted a series of 6 virtual challenges, from 1500m to half marathon aptly named ‘The Road to Madeira’ as preparation for the EMA Road and Trail competition in Funchal in October. At 3 Euros per event, with a whole month to complete each one and little prospect of any real races at home or further afield I registered along with other Masters’ European hopefuls.

Preparation for each race was the same. I put my GB vest and shorts on to remind myself this was a competitive event, I was representing my home nation and I was going to give it everything, whether at Rother Valley or Madeira. A recce of the route and a warm-up session of jogging, strides and drills helped calm the nerves and get me ready.

It was my job to start and finish the watch accurately and submit the correct time on the website. That was tough for a non-technical person. I had already run 40m short in the BMAF 5K road relays in May so was constantly checking the watch in the final stages of each event.

Six races of varying lengths and six months to train for, prepare, race and record. I had considered 5K and 10K to be my optimum race distances and looked forward to the familiar build up. I have to say that whilst track running is daunting, and not a little boring for a trail enthusiast, I did enjoy the thrill of the two shorter events at the end of the series. 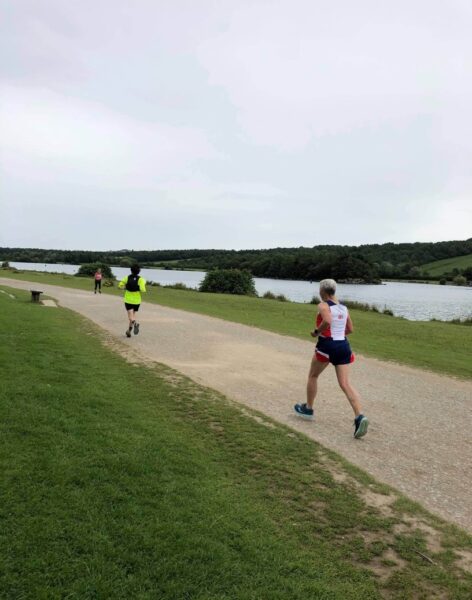 The hardest race mentally without doubt was the half marathon. I hadn’t really trained for the mileage and almost two hours of consistent running, alone and without others to pit myself against, in stark contrast to the actual half I’d done in January was gruelling. Added to that I ran it on the TPT Rother Valley to Hollingwood and back on flat shale which was a test for the feet. In the last three miles I’d gladly have bailed and nursed my burning feet. Thank goodness John Rothwell, coach, popped up at intervals to offer tips and words of encouragement.

The final two events were on track. Now I understand that Sheffield prides itself on being the City of Sport, so I didn’t expect it to be too difficult to find a 400m track. Alas Woodbourn Road was padlocked, empty and strewn with litter, a sad shadow of the former more imposing athletics facilities in the Lower Don Valley. I tagged onto the Accelerate coached sessions at Mt. St. Mary’s excellent track at Spinkhill which at least meant there was company if at an appropriate distance. Now how did Mt St Mary’s get such opulent stadia for their (private)  school whilst the whole of Sheffield has so little?

As the rest of Europe began to emerge from their respective lockdowns the number of participants at each event reduced. From 429 competitors from half a dozen nations at the first 5K race in May the numbers have reduced gradually as national teams have gone back to their normal competition. The final 1500m event in October drew only 56 competitors.

Note: The % refers to the World Age Graded system; that is, how close you got to the world record for that distance run by someone of the same age group and sex.

This series has been very helpful for me. I have continued training and race preparation through a lovely summer period with often empty trails and lanes. I guess the virtual scene will continue throughout the winter as we endure a second or continuing wave of the virus. There is sadly no chance to go to Madeira at the end of October to collect my award. Perhaps 2021 will bring new opportunities.

In the middle of the EMA challenge I sneaked in a World Masters 10K challenge. The event should have taken place in Toronto, Canada so I saved shed loads of cash by running it at Rother Valley.

For those who have not yet considered Masters’ Athletics, this is an opportunity for athletes 35 and over to compete at a national and international level in the traditional 5-year age bands. Age Graded scores give the athlete an idea of how their performance compares with World Records to encourage participation.  Go to the  British Masters Athletic Federation website for more information.

My appreciation and thanks go to John Rothwell, coach, who has encouraged, coached and supported me throughout the series; Andrew Deery who legged it and round Rother Valley with me in the 10K; Joel Kesterton with son Jacob in the buggy who have plodded around and offered company  and encouraging comments; Malcolm Kesterton for being the early morning driver, bag holder and general dogsbody; Stuart Hale who facilitated the track events and offered help with drills and preparation and Mick Wall for virtual technical assistance, advice and encouragement.