Peak Raid 3 is a series of 4 navigation events in the Peak District.

On each event there is a total of 500 points to be gained from navigating to 16 control points over a 3-hour period. It’s up to you whether you walk or run (or both!), and you choose your own route. You can also run solo or as a pair.

This event was the final one in the Autumn Series, the first three having taken place in Alstonefield, Great Longstone and Grindleford in November and December.

Having been abandoned at the last minute by yet another injured running partner, and his promise of home-cooked Parkin, this was to be my third solo Peak Raid attempt!

I didn’t get round to doing a race report for Grindleford, but had I done one I would have told you that after I dibbed in and they gave me the map my initial thoughts were ‘Oh s**t’.

The first two events in the series involved fairly straight forward navigation along tracks and footpaths using OS maps. It was all about choosing the best route and knowing how far you can run to get to as many of those control points (CPs) within the 3-hour time limit. Lots of running.

For experienced navigators the final two events would have followed a similar strategy. But for me, it was a case of choosing any CPs which I thought I might be able to find. Gone was the familiar OS format and friendly map favourites like place-names and other words. Instead?  Contours, colours, symbols…confusion! In addition to that, these last two events were based in open access land up on the moors. Not so many footpaths, lots of bogs, tussocks and boulders.

So, back to the day. Andy Buck had kindly given me a lift to the event. The weather was damp but not raining…yet. We dibbed in and surveyed our respective maps. Not so much of a shock this time, I knew what to expect and had done a little homework. We both set off in the same direction but then Andy took the North section and I went South.

I started down the path towards my first CP as it started to rain. It felt good, I was more aware of the land around me and navigated to the control without difficulty (it was under the big boulder at the top of the hill in the picture). This filled me with confidence! I climbed up to the top of the hill and onto the path, reorientated myself, and made my next decision.

Getting to the next CP involved some lovely running down into a valley, across a road and then up a rocky path through some woods. There were two boulders on the map, and the instructions were something like ‘most northerly boulder, south side’. No problem, I thought. But there was a problem, in that there weren’t only two boulders on the ground, there were about 200! Try as I might for far too long I could not find the thing. To this day it is bugging me – where was it, why couldn’t I find it, what could I have done differently, what did I miss?

I’d spent far too long on CP2. One of the skills of these events is knowing when to give up and move on. So eventually I was running towards my next CP feeling a bit rubbish, being 1 hour in with only 20 points in the bag. My goal for the day was to beat last time’s score of 150 and it wasn’t looking good…

CP3 was in open moorland and I used what skills I’d learned since last time. Find an attack point and get there first. Take a bearing, calculate distance, count your paces. This I did, and while I didn’t navigate directly to the CP I did find it without too much trouble – and it was a 50 pointer – I was back on track. Confidence restored, I made my next decision and ran north.

I found the next two points without much difficulty but by now I was tired and a bit cold. I had only 1 hour left and was quite a way from base, so it was all about getting back on time and hopefully collecting some points along the way.

I settled on CP3 which was a good way west across open moorland. There was no path, noone heading in my direction, but there was a cairn as a mid point so I took a bearing and set off.

After a while I saw the what I thought to be the cairn, but in a slightly more southerly direction than I’d expected. I must have gone off-track, I thought, and I headed there anyway as I could see people and hoped there’d be a track up there. I headed up to it over massive tussocks, it was such hard going. Sometimes I was in bum-deep bog, it was windy and I needed to put my gloves on but didn’t want to faff with my pack so left them off. To my left, a herd of about 50 deer appeared and this lifted my spirits. I made the final ascent to the rocks…and…no it couldn’t be…a CP!  What a sight for sore eyes. I had gone off-course but had headed straight for CP7, brilliant!

A nice lady fortunately understood the mumblings from my frozen mouth and grabbed my gloves out of my pack for me. I headed off down a real path, and then some more knee-deep bog, to CP3, which I thankfully found without difficulty. Now I had 20 mins to get back to base. It was mostly downhill, thankfully, I was so tired by now and my knee was sore. I dibbed in 13 seconds over time and lost 2 points from my total of 180. Job done – all I’d wanted was progress.

I was concerned that Andy wasn’t around as we’d set off together…it wasn’t too long before he dibbed in but he was 15 minutes late resulting in him unfortunately losing 85 of his 295 points! Fellow Striders and Peak Raid regulars Andrew and Caroline Fry collected a whopping 395 points in the MIX category (more than anyone else!), but lost every single one due to dibbing in almost 28 minutes late – harsh!

Star of the day then was Roger Walters in the MV50 category, arriving in 03:01:40 with 350 points and a 4 point deduction. This put him 6th in his category – well done Roger!

The Spring series (footpath based) starts on March 8th in Abney and Bretton Clough, for anyone interested in giving this a go. 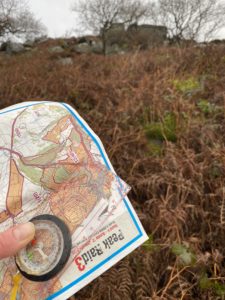