I’d decided to run the Seville Marathon as an excuse for some winter sun, and as a good test of early season form. Being in mid-February the race falls a good two months’ ahead of most other UK and European spring marathons. This obviously means starting a training block significantly earlier than usual, meaning the first few long runs had to fit around mince pies and other Christmas festivities. I was feeling reasonably happy with how things had gone in training though – a nice PB at Four Villages half in mid-January was a big confidence boost.

The race is marketed as the “flattest marathon in Europe” and Andalusia boasts the most days of sunshine of anywhere in Spain, which seems like a win-win. Seville isn’t a massive city so the route takes in a few different loops, with the odd section of uneventful dual carriageway but we never seemed to be too far from some decent crowd support.

Setting off at 8.30am just as the sun was coming up felt pretty early but also meant at least the first half was a perfect temperature for running. Going through halfway in around 1.26 was encouraging, having got into a couple of decent groups to shelter from the stiffening wind on the exposed sections The shout from a guy from “Watford Joggers” as we went under the halfway flag that “the race starts now” was a good reminder not to get too carried l away though.

As the second half went on, the temperature rose and the course got twistier as it took in more of the streets of the old part of the city. By 35km, the familiar feeling of having to try significantly harder to maintain anything like my early pace had set in and it became a battle to avoid the wheels falling off completely. 4.05 kms were quickly becoming 4.10s and memories were coming back of difficult final sections at marathons in previous years. My last few big races have been ultra-marathons where difficult sections can be overcome by slowing to a walk and eating cold pizza, but unfortunately the fine margins of trying to run a quick marathon time meant the only option was to grit the teeth and push through.

Stress levels were also raised by being cut up a few times on some tight corners, and never quite being able to master being able to run hard and take water from paper cups without at least two thirds of the contents ending up on my face (if anyone has any tips on this, please do share…).

By the last few kms though, the crowd support was great and the continuous shouts of ¡vamos! really helped to block out the leg pain. Down past the cathedral, across the main square and the final corner by the Plaza des Espana was in sight. Around this point I’d got into a bit of a race with a St Albans Strider (go Striders!) which was the final bit of encouragement needed to give it everything up to the blue carpet over the finish line. A glance at the watch which showed a time of a shade under 2.53 – a PB of well over six minutes. Chuffed!

Seville is clearly a popular race with Brits – our flight back to Manchester was littered with purple branded marathon jackets, medals, (as well as potential Olympians:  https://www.thepowerof10.info/athletes/profile.aspx?athleteid=5269  and ultra-running superstars:  https://www.thepowerof10.info/athletes/profile.aspx?athleteid=17947).

I’d definitely recommend for anyone after some near-enough guaranteed sunshine and a quick course to test the legs on. Maybe this road running lark isn’t so bad after all…

The winner of the marathon was MEKUANT AYENEW GEBRE (unaffiliated) in a time of 02:04:46 and first lady was JULIET CHEKWEL in 02:23:12. Full results can be found here. Hal was the only Strider participating, crossing the line in 02:52:53. Well done on the new PB Hal! 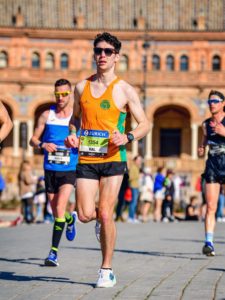