On Friday evening we hosted the very first Women’s Indoor team track event for the clubs  of Sheffield. I always wanted this event to be as inclusive as possible, so therefore targeted promoting the event at clubs such as ours, who have a wide range of runners.

I firmly believe that although running is an individual activity ,  there is an extra tiny percentage of effort made when representing your team. And nothing quite like being part of a relay team or amassing points for your club.

With an obvious time limit, we opted for 5 events: 800M, 60M, 400M, Eliminator and the Relays. The races were categorised by running ability thus trying to ensure that runners were competing against women at asimilar level.

We try to promote these events as friendly and competitive and throughout that was seen in abundance. With the enclosed nature of the arena and the trackside cheering from supporters it created a really special atmosphere. Runners were wildly shouting for their teammates but also supportive of all runners.

There were a number of great races and performances from runners. The very first race we started with a series of 800M saw our new superstar, Julia Waldron employ a tactical masterclass to judge her pace perfectly and overtake runners, including bronze medallist, Maggie Vickers, to gain the first gold of the evening.

The second race saw the first of 4 golds on the night for Kimberworth’s (K) Laura Mann. Our very own Laura, Laura Fletcher just missed out on the medals but obtained an excellent 4th place.

Race 3 saw Sarah Ward lead for the first 3 laps and still finish with a silver medal as she held off a spirited challenge from Ali Griffiths of Smiley Paces (SP).

Race 6 saw Striders occupying the top 5 positions and all going under 2:42. An incredible feat and an indicator of how well the club is progressing at the top end. Frances Roberts again showed what a track specialist she is, but was pushed all the way by Abbie Pearse and Heather Hatton.

Race 4 saw the first Strider’s record of the night as Charlotte Pierson’s run of 10.15 briefly saw her as the Open Women’s 60M record holder.

The fifth race saw 2 Striders both go under the previos Striders Vet record as Kate Scott and Lucy Broom ran 9.35 and 9.53 respectively. However neither were fast enough on the night to defeat the flying Caz Kay (Totley) who ran a ridiculous 8.39, a time which was only beaten by 4 women in the UK in 2019.

Race 6 saw 2 records smashed as Nicola Galley became the fastest female Strider ever in a time of 8.46 and Gillian Burgon became the fastest ever Vet in 8.61, meaning Charlotte’s and Kate’s new records were both gone within 15 minutes.

The eliminator were a joy to behold, the concept of them is that each lap the runner in last place is eliminated. It makes for some very obscure tactics. It’s definitely more fun for the spectators than the runners. Race 2 saw an epic battle between Striders, Alice Thomas and Aisling Redmond who both gained podium places the hard way. It was an immense race as nearly every lap saw a 40 metre sprint, and by the end both women were tired to say the least.

Onto the relay. The 4×200 m saw a record established as Julia Waldron , Heather Hatton, Nicola Galley and Frances Roberts gain 2nd place, despite the worst baton change ever in EIS history  between Nicola and Frances.

All in all Steel City Striders narrowly defeated Smiley paces to gain the overall team prize , with Totley and Kimberworth tied for 3rd place , followed by an impressive performance from Handsworth Roadhogs.

It was a very special night and one that we will repeat outdoors in the summer. 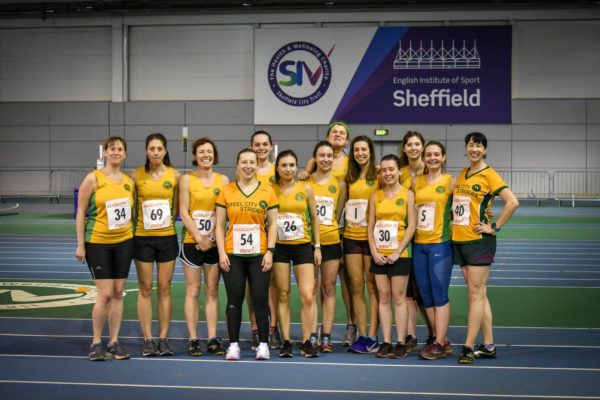