After something of a hiatus (oops!), this is going to be a bumper update, to the extent I’ve finally managed to to reach the limitations of Google Maps and will have to have a rethink of how to plot the journey in it’s entirity.

During the period of this update we’ve seen some bumper days of activity, with 2 days of over 300 miles logged, 1 over 400, and a quite amazing 500 miles logged on the 16th. Absolutely amazing stuff by everyone.

With the easing of guidelines around exercises we saw some big individual efforts, Andy Buck logging 65 miles on a ride, while a slightly mysterious “Fat Fil” knocked out over 20 miles running, I’m sure too the air was filled with the sounds of music on Julia Waldron’s 9 mile run. In total it now means the good people of Sheffield have combined for a staggering 3593.42 Miles!.

So where does that take us next on our journey? Picking up from the eponymous Porto it seemed rude to not visit Lisbon too, a city that is perhaps not considered one of the most historic European capitals but is 2nd only to Athens in age. From there it was back again into Spain for a flying visit to Seville before deciding it was time to go straight and head for Gibraltar. I’m sure there’s more than a few survivors of the Striders vs The Rest of the World match who would fancy themselves as being good enough to win a cap for Gibraltar (currently 196th in the FIFA rankings). After a little bit of monkey business with the apes of the rock it was over the water to Tangier.

Hopefully no one was left behind on the tarmac as we moved at pace to the next stop of Casablanca, as there wasn’t even time for Sam to play it once, let alone again. The next port of call provided entrepreneur Nick Burns chance to scout out potential ideas for new Striders merch as the tour landed in Fez. Although I must say the prototype design didn’t look half bad.

A midnight crossing of the Algerian border almost proved a disaster as a member of the rogue band of brothers referred to only as “Headtorchers” blasted out several millions of lumen, but thankfully the border guards mistook it for a eccentric naturist outing. Onto the capital of Algiers itself, before finishing this mammoth leg in a bit of a Tizi, Tizi Ouzou to be exact. 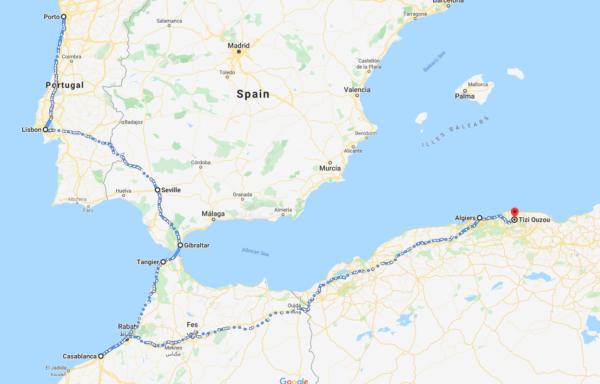