“If you go down to the woods today you’re in for a big surprise!!!”

Too right! Best way to describe this year’s TNT is 10 miles of cross country running.

This was my first TNT, I thought how lovely to start the new decade with a picturesque trail run around the Temple Newsam estate just east of Leeds. Arriving in the dark, car parking was very orderly and plentiful. The heavens opened as we made a dash to collect our number. After saying “hi” to some cute piggies we hid in the car until the last minute, fortunately there were lots of toilets and the bag drop was very slick, so we didn’t need to queue and get cold before the race began.

TNT 2020 was certainly picturesque, starting off in driving rain, we did a lap of honour in a big field in front of Temple Newsam stately home and then headed off down into the woods, at this point we were already pretty muddy but surely the woods would be the muddiest most technical bit of the course? Er no that was the easy bit.

With a narrowing of the path there was a stretch of single file as we undulated alongside a dual carriageway and turned onto a trail path around a lake. This is when the fun really began, mud and big puddles everywhere, if anyone has watched The Vicar of Dibley when Dawn French disappears into a puddle, well there was a moment when, as a vertically challenged person, I ended up thigh deep.

Turning away from the lake we continued to scramble through mud, the water station at mile 6 marked the point were we began the climb back up towards the finish. I asked a guy in a Tough Mudder t-shirt if he felt at home, he didn’t seem amused, so I sheepishly trotted past him with Clive who was now getting quicker, it took all my strength to keep up with him on the hills due to the slippiest mud I have ever run on (shoe fail on my part). I was glad to be back on the flat as the sun came out and we did another lap of honour of the now boggy field to finish in front of the big house.

Rewarded with a goody bag, medal and a pack of Seabrook prawn cocktail crisps which co-ordinated nicely with the vibrant pink of the finishers t-shirt, we squelched off to dry over a coffee and tea-cake in the on site cafe, perfect!

There was never a dull moment, great views en route, varying from grand estate to woods and trail. Despite conditions making a challenging course even more challenging, this was a cracking event, brilliantly organised, we were well looked after by such a friendly marshalling team.

Of the 837 finishers three were Steel City Striders: 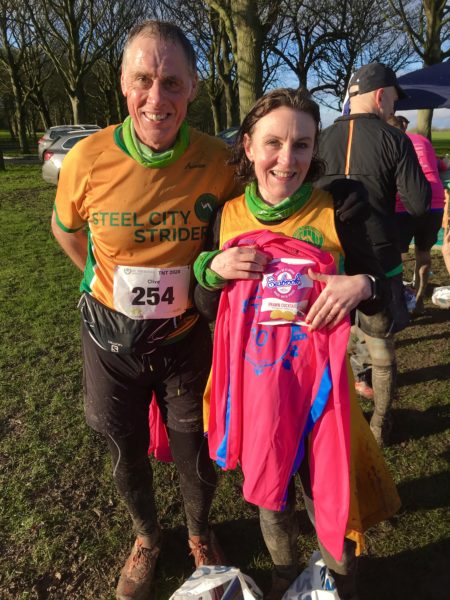