Very unusually I entered a race that no other striders were taking part in – the Trafford 10k 2020.

I was tipped off about this race by Tom Halloway and Andy Norton early last year. Tom managed a PB at the time and Andy advised it was one of the fastest races in the country. Naturally that had me googling it.

Upon researching it, what I found was that it seemed to attract an incredibly elite field (of which I could probably only compare to Doncaster 5km that I’ve previously experienced).

Immediately my eyes lit up to the prospect of getting dragged round with athletes far better than myself, to a massive PB. The fact it was 5 miles from my sister’s house and that I could combine it with a visit to see her and the family for the weekend, made it even more perfect.

I’d trained well over Winter and by Feb 2nd I had PB’d in HM, 10km and Parkrun. I felt confident, wanted to improve my PB further and really thought I could “smash it” at Trafford 10km going for something a bit special.

Sadly by Wednesday the week before, there was mention of a Spanish named storm “Jorge”. I thought, oh bloody hell, Jorge can do one. I didn’t read into it too much, as you know what our weather’s like and the predicting of it. Unfortunately though they got the majority of the forecast correct for once.

Race day came. Upon arrival, you could sense the hype and the quality was noticeable even on the warm-up runs some were doing. The winds were 30–40mph and before the start the announcer advised there were two flooded roads on the course, about 1–2 inches deep and a vast amount of pot holes and puddles so take care etc. All accurate statements.

After a 5 sec count down, off we went. The first mile was so congested. I would estimate being about 200th in the pack.

A check of the watch at 400m to make sure it had started recording and I was at 3:46/km pace, when I should be at 3:21/km (target pace). So I started to dart in and out, picking my way through the field.

2km 3:17/km. Crucially though, it wasn’t smooth and I was fighting both the wind, pot holes, flooded roads and congestion. I just knew I couldn’t last at that pace, weaving the way I was and pushing as hard as I was against what seemed mammoth gusts. In reality the wind probably wasn’t that bad, if you weren’t running.

We then turned a corner at 3km seemingly into the wind and this was the point, I just knew that the PB wasn’t going to be on, though I was still happy to work hard to see what I could do.

So Instead, I just tried to pick people off, one at a time,. This helped to keep my motivation and I tried to stay as smooth as possible. As I got a bit more jaded at 6.5km onwards I diverted my attention to cadence and form. All mental diversions to take me away from the real struggle that was going on and my mind, which was begging me to ease off the gas. I was really pleased I only got passed by 2 people the whole way round and must have passed about 100 myself.

Another lesson learnt I should have been more confident and entered higher up the pack on the start line. Anyway will remember that for next time, its all good experience right?

I thought I’d be gutted, but I wasn’t. Analysing it right after as I tend to do. I ran well and sometimes you can be at your best but other things just don’t go for you on the day. I was fortunate enough to find myself chatting to Eilish McColgan all the way back to the car. Amongst other things discussed, I asked how she found it and she found it? “S**t, It was that bloody wind” she said smirking. It made me smile as at that point I knew I wasn’t the only one that found it tough.

I’d recommend the race. It’s a great experience first and foremost and has got great PB potential. Pretty flat on country bumpkin roads with the odd mound over a canal or rail line but that’s it. 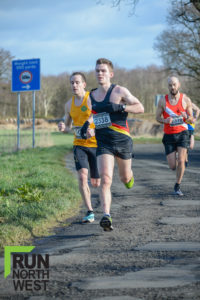