It was with mixed feelings that 2 brave Striders set off over the peaks to Lancaster for the Trimpell 20 race last Sunday. This race was the last long run in our Manchester Marathon training and with that cancelled this became a ‘target’ race. Race Hq was in the 3-1-5 health club and was a very civilised pre race venue, plenty of toilets and lockers to leave bags. The race started with very little fuss, those of us a little way back were not even sure we had begun! The route started out along side a dual carriageway and I was wondering if the whole race was on road, but it soon turned off and down onto the path along the river Lune. The course followed the river out towards Morecambe where it looped back into Lancaster, passing the start/finish at 14 miles. The last 6 miles were out and back along a cycle path where we got to wave at the faster runners coming back. The whole course was mostly flat and and on good compacted trail. At the finish there were bananas, apples and waggon wheels. I collected my loot and headed back to the health centre where a speedier Strider was already enjoying the hydro pool! We have decided all races should end in such a facility….. This should have been a great race, but with the Manchester goal so recently cancelled, I lacked motivation and the last 6 miles turned into a grind….would recommend giving it a go next year, there were only the 2 Striders and a couple of Dewsbury runners that had ventured over the Pennines!

The Men’s race was won by Callum Rowlinson (SEN, Salford Harriers) in at time of 1:46;49.  First woman was Alison Lavender (SEN) Oswestry) with a time of 2:03:58,  For a full list of results see https://www.runbritainrankings.com/results/results.aspx?meetingid=347466 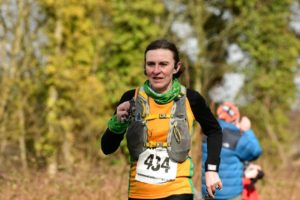