I was fortunate to visit Vancouver as my partner Emma was attending a workshop for the week and hey with a hotel covered it was a no brainer! While planning my trip I realised there was a nice HM during our stay, but it was sold out but after a quick email to the organisers and t’dah two race entries – £95.52 lighter.

The First Half is part of the BC (British Columbia) Super Series and RUNVAN Grand Slam with the first event (1991) originally established as a build up to the Bank of Montreal Vancouver Marathon in May.

The course is a scenic route from The Roundhouse Community Centre in Yaletown, following a part of the seawall up English Bay and around Stanley Park, with a brief detour on a gravel trail around Lost Lagoon before heading back to the start. The flat course is a PB dream as there are no major hills, but there is a small, short, demoraliser that pops up with about 600 meters to go!

The race pack is available from one of the local running shop on Friday and Saturday or on the day at the start line (so no worries about international postage) and includes an ‘Exclusive technical tee’ and race number.

On the morning, with 2,405 runners the Community Centre was a buzz of activity with people collecting race packs, swapping shirt sizes or using the gear check (which I was disappointed to learn was a bag drop rather than congratulating me on my outfit choice).

With a nice early 8:30am start and temperatures hovering just over zero the dress code was a mixture of vests and puffer jackets (with bobble hats) with a large contingent of Nike Vaporwhatevers on display. The course was well supported with water/electrolytes stops and marshals but I realised half way round “thank you marshal” was lost in translation and totally ignored.

Although not to the same standard as the Sheffield races, there was a good splattering of cheering public which included some almost aggressive motivation to one poor lady to ‘help’ get her up the small incline at the end. The Stanley Park Brewing company offered an alternative map giving a diversion to their bar although you could use your bib for a free beer after the race too. The course also offered motivational posters reminding people they could have picked chess as a hobby or how the runners were the reason the supporters got out of bed.

The race was won by Caleb De Jong of Winnipeg in a new course time of 1:04:18 with the first lady, Andrea Lee of North Vancouver completing the course in 1:16:13.

Full results can be found at: 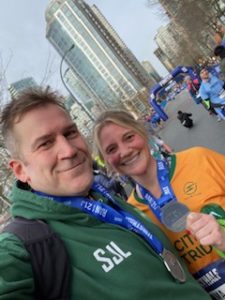