After finishing my ultra in June and taking a few days off to recover I had 15 weeks (including a couple of weeks to taper) to train for this, my first marathon in a few years.

I started with an optimistic target of 3 hours 15 which would be a 2 minute pb. However hopes of this faded when my calf gave way after 8 weeks of running nearly every day. I lay off running for two weeks but kept up a heavy regime of cycling and swimming. The next two weeks involved a gradual return to running at pace, although from now on I decided I would only run four times a week and swim and elliptical most days too.

This strategy at least paid off in that I didn’t pick up any more injuries. My hopes of a pb were further dashed when I picked up a cold two days before the race. At one point it did cross my mind to pull out, but only briefly!

Sleep didn’t come easily for those two nights and to be honest I wasn’t feeling it on the morning! However once at a windy and showery start line I decided I was still going to go for it. After a brief chat with some of the other brave Striders (there were six of us altogether) at the start and encouraging words from Ben Stittle, we were off. Surprisingly I felt good for the first few miles and settled down to 7.22 minute mile pace.

The changeable weather continued and at times the effort of fighting against the wind and rain was quite challenging and every now and again I resorted to a spot of draughting! There were points on the course when I passed runners coming the other way and it was heartening to hear a few ‘go strider’ shouts ringing out and Ben Stittle once again popped up somewhere around the 10 mile mark to give further encouragement! Half way came and went and I was still averaging 7.23 pace.

The pb was still on at 30 km, but then slowly but surely it seemed to be getting harder! By 23 miles I didn’t need to look at my watch to know I was slowing down; it was now getting painful! There was a long steep hill in the final mile which really knocked the stuffing out of me and it took all of my willpower to not walk. A few long minutes later I virtually staggered across the finish line, relieved to see the clock had just ticked past 3 hours 20 and welcomed by my patient partner. I couldn’t hang around for my fellow striders to finish, but well done to you all on what was a tough run!

If you are thinking of taking on a marathon I would highly recommend this one; £30 odd quid for an early bird entry, well organised and the best goody bag ever!

Well done to all 6 Striders :

Full results are available on the 2021 Chester Marathon results page. 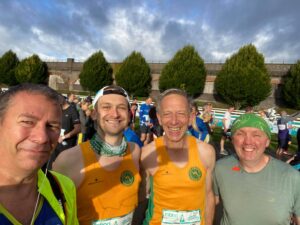