After a year away 4 and a bit Striders teams were back at Berry Hill, Mansfield, for the cross country relays! It was great to turn up to see all the club tents and flags and the event always has a great atmosphere. This has become a classic cross country course and after the mud of 2019 the course was dry and very runnable though slightly windy in places. A chance to run with some of the best in the Country and watch them too; Olympian Jess Judd was spotted putting her all into a leg for Blackburn Harriers.

Jacqui Herring started us off running 13:00 (after running a PB at parkrun in the morning), Harriet Davies took over to run 13:22 and Caroline Brock ran the final leg for the team in 11:39

Charlotte Civico was first to run sticking very close to Jacqui to finish in 13:09, Tracy Davies was second up running 15:08 and Kate Scott ran the team home in 14:17

Sam Brown kicked off with 18:37, Stephen Schubler took over and ran 19:09, Robert Bishop ran 19:53 and Richard Pearson finished the A team with the fastest striders leg of the day in 18:16

Richard Pegg took one for the team by pulling out of the main teams as he was recovering from being unwell and ran in his very own team in 24:55. Team Peggy was our favourite of the day! There is nothing quite like being in the 1st leg at a national relay and worth the experience.

The relays are great fun to run in and just as much fun to watch, this is a great afternoon out and next year we’ll aim to take more teams with us so come and join us! 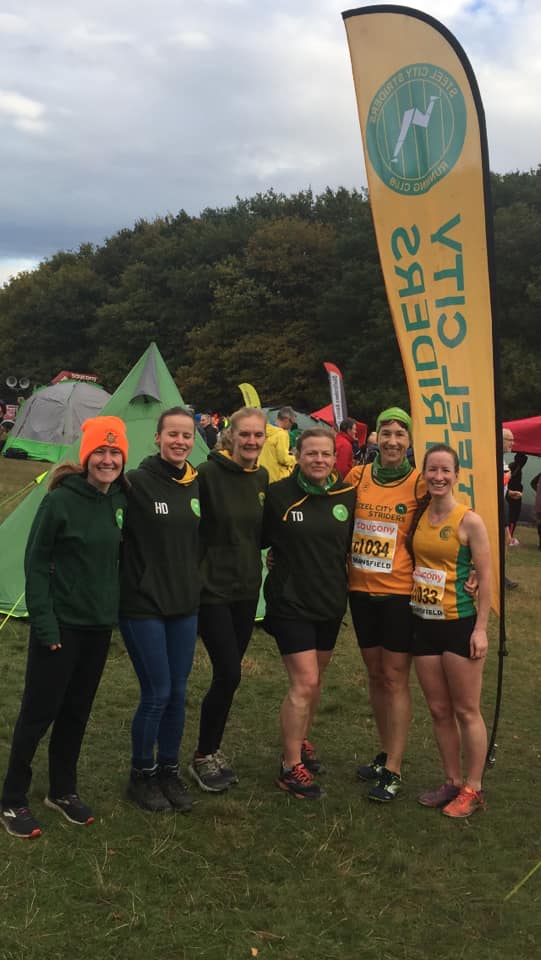