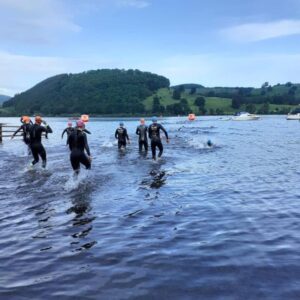 Let’s get the basics out of the way.

It’s a triathlon, you swim, you cycle and then you run.

It’s a ‘Middle Distance’ triathlon, commonly referred to a ‘Half Ironman’ but because of trademark reasons, organisers other than the Ironman brand can’t use the term.

The distances involved are as follows:

It’s not my first middle distance triathlon, having done 2 in consecutive years (2015 and 2016) but my first since the girls were born.

It takes a lot of time and dedication to train for one (as it does for any long-distance event). In training, I have clocked up:

So, I have missed out on many lay-ins and some weekends, we haven’t done anything until 12pm – sorry Kay. I have an absolutely fantastic wife who puts up with me training and talking about it – to do the training you have to have buy-in from your family.

The event took place just outside Pooley Bridge on the shores of Ullswater, which according to Stuart Jones is the 2nd largest lake in England. The swim obviously took place in Ullswater itself, the cycle consisted of a 4 mile out and back section, 2 large loops and a smaller loop, with a fast section along the A6. The ride was undulating but nothing overly taxing. The run is described as undulating, Lakeland fell trail – think stony descents and rolling climbs.

As previously mentioned, the swim took place in Ullswater, 2 laps of a 1km course. Now, swimming is my weakest discipline out of the 3. Given Covid lockdowns and restrictions I have been limited to just 45-minute slots in the pool and had not been able to go up to distance in the pool prior to race day. I am not unique in this situation, which caused the race organisers to offer people the chance to do just 1 lap and get out, although if you did, you would be classed as a DNF.

The swim itself was classic ‘beach’ start, you run over the timing mat enter the water and swim. The swim was ok, I got kicked and swam into a few times, probably did the same to other people but that is normal in a mass open water swim, its technical term is the ‘Washing Machine effect’. I did briefly think about getting out after one lap but decided against it. I emerged from the water and over the timing mat in 53 minutes and 49 seconds.

The cycle, pretty much went to plan, the way out was undulating with 3 category 4 climbs – nothing major to be honest, I did hillier ones in training. One the first lap, I nearly lost my water bottle, I dropped it and had to stop to retrieve it. The second lap was fine and I got involved in a couple of battles with people, overtaking and getting overtook. The third shorter lap was ok until it came to the point in which I had to turn back to Pooley Bridge, I missed a turning and had to do a quick U turn and on the single-track road to the campsite, I got stuck behind some traffic as someone was towing a boat. I completed the bike leg in 3 hours and 42 minutes.

The run to be honest didn’t really go to plan. To start off with, there was a trip to the toilet which added some time on. The start of the run was flat for about half a mile and then went up for about 2 miles up onto the fells – I walked this section, it was hot and my legs were shouting. Once I was at the highest point, I ran and walked in turn, making sure to take on fluids. I knew at this point given the heat and everything I wasn’t going to get a fast time so settled into enjoy the route. I was pretty much on my own for most of the route and when I caught up with people or in most cases got caught up by other people, we chatted and then separated.

All was well up until the drinks station, 6 miles in, up to that point the route had followed the ‘Ullswater Way’ but that ended. It was time for the dreaded out and back section – think the Percy Pud but with no landmarks, trails climbing off in each direction and only sheep to keep you company. I would pass people coming the other way and they said ‘not long now’ but still the point didn’t come – it was mentally a dark time but most of this section was on the road. I reached the turnaround point, ran back the other way and passed the drinks station.

From that point, it was all on road, still undulating a bit but it was shaded and had a breeze now because it was alongside the lake. At the turnaround point, I had found out that I was 3rd from last. I managed to get into a rhythm with my running and just concentrated on putting one foot in front of the other whilst mentally saying “it’s just a ParkRun left”. I overtook about 6 people on this stretch who were just like me and I crossed the finish line in 2 hours 59 minutes and 59 seconds – my slowest half marathon ever (my fastest been 1 hour 44 mins).

I loved the experience, the routes and the scenery. Am I disappointed with my time? Not really, I choose the race for the challenge and the route. Would I do it again? Not that particular one, no but I will definitely do the distance again but I need to give it a few years until both the girls are in school – Audrey is only just 2 years old.

What next? I have the Hathersage Hilly, a sprint triathlon in July, Dig Deep 12.2 in August, Sheffield Half in September and then Tissington Trail Marathon in November.

What advice would I give people who are thinking about doing a triathlon – jump in, it’s a great thing to do. A lot of people say it’s the swimming that puts them off, its my weakest discipline and if I can do it, they can too.

A special mention has to go to Stuart Jones who came on the weekend with me and supported me throughout the event. 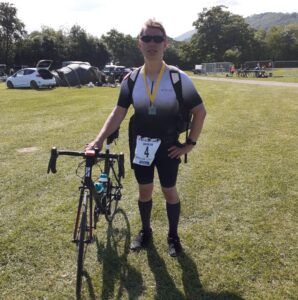 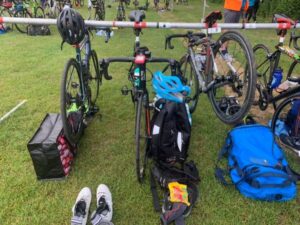