Right where do I start? Quick background, in 2020 after a family bereavement and the difficulties of Covid/lockdowns, a throwaway comment about a job offer in Abu Dhabi started to be seriously considered. Fast forward to 31st March 2021 and we’re on a plane relocating to the Middle East.

As with most of you, after a hiatus from races I was chomping at the bit to find any events but with summer temperatures up to 50+ degrees the earliest ones were from October (when the early morning temperature of 28 degrees is classed as ‘cooler’). So Emma and I signed up to our first race in Abu Dhabi, the ADCB Zayed Sports City Pink Run on Friday 22nd October.

Now training in the Middle East during the summer months is challenging to say the least with midday temperatures hitting 50+ but even the mornings/evening are in the mid 30/40s and don’t get me started on the humidity. To add to the challenge I hadn’t done much running due to lockdowns and relocating (but it didn’t stop me eating!). So I started slowly and focused on heart rate and hydration. As the base training continued it started to get easier and the miles started increasing until the, “It’s this Friday!” conversation.

Back to the Race Report…..
The Pink Race is sponsored by Abu Dhabi Commercial Bank (ADCB) and is now in its 10th year. Helping to raise both awareness and money for breast cancer via the Al Jalila Foundation. The run is open to both runners and walkers alike covering distances of 3Km, 5Km or 10Km starting and finishing inside the Zayed Football Stadium. With the 10Km race starting the earliest (at 6:30am) it was an early start, to beat the temperatures.

To follow the covid guidelines, race packs (Pink Tech Tshirt and race number/timing chip) were available on Wednesday and Thursday with only ‘out of Emirates’ entrants allowed to collect on the day. PCR results (within 48 hours) were given a wristband to allow entry to the race.

The email communications were plentiful and the directions on the day were clear. The race starts and finishes in the Zayed Football Stadium and with the 10k basically being a 2 times loop around the car park, with the different distances starting at different times. In addition, due to social distancing, runners set off 4 at a time with bins available to dispose of face masks (with a replacement available with your medal at the end).

Due to the cause it was more of a ‘fun’ run atmosphere which made any attempts of PBs difficult as the 3k and 5k races started to congest the narrower sections. The course was nice and flat despite the scenery being a little boring. That said the support from the volunteers was great and water stations frequent.

Finishing in the stadium you were greeted by other runners, volunteers and the UAE Radio One compère before collecting a nice bit of bling (to go with the earlier collected pink tech tshirt). There was various photo opportunities at the finish podiums and pink race frame along with health check goody bags.

Results were via a live feed and tracking during the race was available. Course photos and a printable certificate were made available after the race.

In summary a very well organised event for a worthwhile cause.

The results were split into male and female across the different distances. 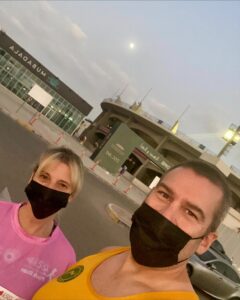