16735 runners for the 47th BMW Berlin marathon including lone Strider, Paul Smith. After talking to Paul, he told me about being put in the wrong pen and having to start at the back. It took nearly 90 minutes from the start of the race for Paul to cross the start line. Sounds like a nightmare for him and certainly contributed to what he described as a disappointing time. Hopefully, he’ll get the chance to go back another time and post an improved time. 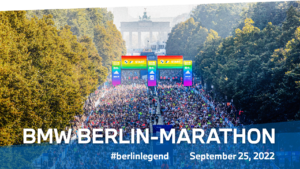