This Fifth Boston Marathon and Half Marathon (not in Massachusetts US) was a terrific event, and a race that has drawn hundreds of very capable runners from the country after the lifting of lockdown restriction on real marathon event from May.

There was a medium size turnout on the day, with around 698 doing the full, and 526 the half. The half was won at 1:07:35 by Simon Birch from Hinckley, and the full was won by William Strangeway of Lincoln Wellington AC in a pretty impressive 2:22:45. First lady was Abbey Van Dijk of Derby Athletic Club in 2:47:59. The two routes were shared for the first five or so miles so the front runners in the half caught up with the tail of the marathon, but it wasn’t a problem as the runners were well spread out.

The race has been organised brilliantly considering social distance was still required. The spectators were not encouraged on the day, so there were more marshals and volunteers than normal supporters. The race started by the mayor in the picturesque town centre and finished at Boston College (next to the car park).

The weather was generally warm and breezy, temperature raised from 15 to 20 degree. Fortunately, there were loads of water stations which was vital for running marathon under this weather. The course was well marked route, and very flat, compared to Sheffield.  It’s all roads, mostly farm roads between fields by the coast, bit of mud and trail routes, but fairly neat.  It’s a fast course.

I was there only after a last-minute decision because of a bad injury in February which took a couple of months to recover. Last year I registered three marathons, but all have been cancelled, so I truly wanted to have a real race before my 50th birthday this year. From March 2020, I have been working from home for more than 15 months and daily life is getting into a repetitive routing. Previously I went to Virgin Active a few times per week running on the treadmill or swimming. It has not been possible to keep the routine, so I gradually changed to running outdoor. Running has become a very important part of my life during this Covid-19 and I enjoy doing it either with friends or by myself, after long hours’ working on computer, doing zoom-meeting or looking after three kids at home.

I had been training for several months but there was no clear goal for this race with the interruption of my knee problem. Previously I only did one marathon in York and this is my 2nd.  On the racing day, I had some unfortunate personal incidents. I missed my group starting time and my watch suddenly played up. Without knowing of my pace, I just ran by feeling. The final time I have got is 3:11;10 and I felt I could have pushed myself a bit further as my race heart rate is the same as my normal SLD training day heart rate. Considering this is the first race out of Covid-19, I am still pleased that I have done it. I hope next time I will be back to the event with more Striders and get a better time.

The results show that four other Striders finished the race including Adam Briggs who turned out a personal best together with three others who finished within 2 minutes 30 seconds of each other. This may suggest an epic three way battle but the chart below (drawn from Stava with its inherent inaccuracies) show three rather different races. All three regularly train together but the only time that they saw each other was at the start and at the finish. 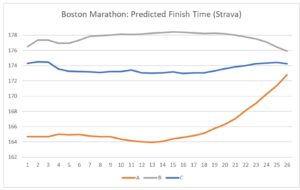 Athlete A went out courageously and was on target for 2:44 at half way but soon after that things started to go wrong. Those of us who have been in this situation, “blown up” to use the vernacular”, with athletes continually going past know how deep you have to dig. This is the point where professional athletes step off the track but lesser mortals grind it out to the bitter end. Needless to say Athlete A is bitterly disappointed but “Faint Heart Never Won Fair Lady” as the saying goes. Athlete B had been injured prior to the event. With this background he started cautiously but at twenty miles (where the marathon really starts) he felt strong enough to increase his pace and actually ran a 2:20 negative split; very rare except in championship events signalling that he didn’t run to his potential. Nevertheless Athlete B was delighted with his performance although he’s really capable of a time in the low 2:40’s. After a few miles to sort out the pace, Athlete C ran consistently and although drifting later on as the sun did it’s worst she went on to surpass her expectations smashing her personal best and the three hour barrier for the first time, finishing second woman overall and first F35, setting a new club F35 Marathon Record and, best of all, beating Athlete C and nearly doing Athlete A who both are always ahead of her in training. In her own words “I didn’t catch James 😂 but I am super happy with the time. Never thought when Jen (Jennifer Rich) ran her sub three in Rotterdam that one day I would be able to do that to.”

Let’s not forget the half marathon with four Strider’s braving the sun. To quote Ben Stittle “Was a fun day out there yesterday! The heat and wind were unavoidable,” First woman was an F35, Emma Hodgson (Cambridge University) 77:16. 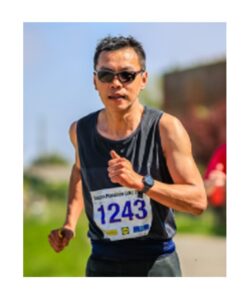