What a great event and much kudos and thanks have to go to Andy Buck for organising the Striders teams despite being unfit to run and having to watch from the sidelines.

Striders managed to field a men’s team and a women’s team this year. We had more in 2019 but that was because the event was held at Fairholmes so much closer to home than this year’s event at the Howgills, just off J38 of the M6.

The organisers had a warped sense of humour as they made the competitors walk/run a 3 mile route, off road and pretty wet, boggy and slippery, en route to the event field. However, this was just a pre-curser and warm up for the real thing. The climbs (and descents) in the hills round here are immense, and so it turned out to be as we witnessed many a slide, fall and cartwheel down the descents especially at the end of leg 3 and leg 4.

The first leg is a solo leg of 5.9km with 430m of climb in it. Abbie Pearse decided the best way to deal with this was to wear a size 7 shoe on one foot and a size 9 on the other. I think she’ll tell you that the experiment was not a success. Mick Timm was a very able late callup for the injured Simon Bayliss and both leg one runners ran their hearts out on an evil ascent and descent. 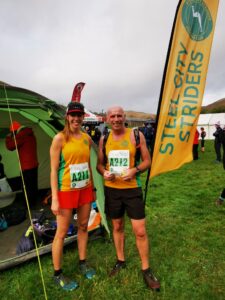 Next up was the navigation leg, Leg 2. The ladies team of Alison Barrett and Harriet Davies were away first shortly followed by myself and Ian Stinson, making his 9th successive appearance at the fell relays, and every one on the nav leg – amazing achievement. The nav leg was 10km and had 700m of climb in it. The visibility was generally good, there weren’t many route choices so it was pretty much a follow the leader kind’ve nav leg. Good visibility however allowed Ian and myself to set targets ahead and we slowly gained a few places and finally, on the steep descent into the event field, caught up with the Striders ladies team. We ran into the home straight together but in a very ungentlemanly fashion, pipped Alison and Harriet to the changeover. 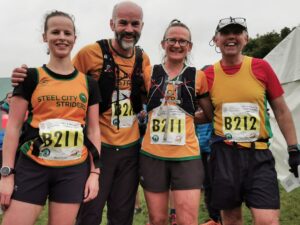 Sadly, I had to leave at this point so I don’t know much about legs 3 and 4 except they both contained a brutal descent at the end. I’m also aware that Rob Davies lived up to his reputation of being late by leaving the leg 3 team high and dry for 17 seconds before deciding to show up to run his leg 4. All the evidence is available on this video clip here:Fell Relays Video

Abbie Pearse descending speedily (around 6:30 mins in)
Nick Burns, Ian Stinson, Alison Barrett and Harriet Davies finishing leg 2 (19:30ish)
Louis Wood and Paul Middlemas bellowing at Rob Davies while he finishes his coffee at the leg 3/4 changeover (23:45)
Siân Elizabeth and Caroline B handing over to Becky Pease, again on the leg 3/4 changeover (27:30) 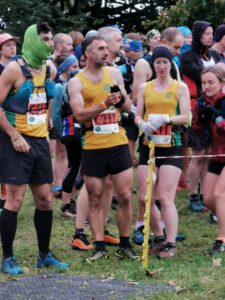 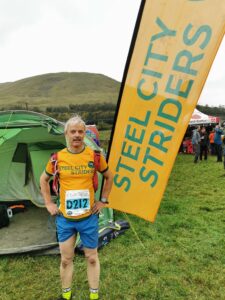 Excellent effort and results from both teams. There were 216 teams taking part in total. The men’s team finished in 107th place and the ladies team finished 131st. Rumour has it we might be going to Scotland next year so watch out for the date and get it in your calendar! 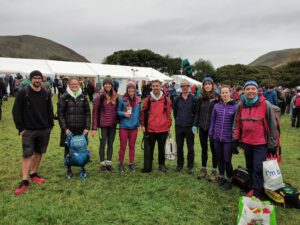