This was another race entry that was carried over from last year. In honour of the Bullock last year, I ran this Millers’ Way from Kendal to Carlisle, a 52 mile route, all by myself. This year I was able to share the joys and the pains of what turned out to be 58 miles with Ben Heller and Simon Bayliss.

The race is a fund raiser for the Hazel Grove scout group and is predominately a walk but they allow runners to take part also. However, with a midday start, the runner is pretty much guaranteed a late night/early morning finish and so it turned out to be for us. We were joined on the start line by fellow Strider Matt Gibson who was looking to beat his 2018 finish time of 14 hours and 38 minutes. Sadly for him it was not to be and he retired from the race at Miller’s Dale, after completing around 25 miles, still a mighty good effort.

The route is a combination of lanes and trails and the 12 checkpoints en-route are at places like Chinley, Edale, Castleton, Taddington, Chelmorton, Millers Dale, Earl Sterndale, Walker’s Barn etc. – all places I’ve heard of, but some I’ve never visited.

We all agreed that we were suffering a low point coming into Edale (about a third of the way, only 40 miles to go) and the climbs over Hollins Cross then out of Castleton did nothing to help our struggles. However, soon after, Simon got the caffeine bullets out and we never looked back.

The sunset was amazing as we came into Earl Sterndale and in the shadows of Chrome Hill, Axe Edge and the weirdly spooky pub, the Quiet Woman. Headtorches were now required for the remainder of the race. Ben and I had reccied the next part the week before and were pleased that we had as it was the trickiest to navigate and doing it in the dark would have made it even more difficult so thankfully we never made the same mistakes as we did the week before. There was a farm that we went through last week but this week, as we were opening the gate, we heard a shout of ’round the back’. With over 200 people behind us, I think she was in for a long night!

Our last climb was up to a trig point on White Nancy which, again, I’d never been up. The views of the lights over Macclesfield on one side and Manchester on the other was quite spectacular. It’s also the first trig I’ve ever seen that was painted with St George on it.

After a trudge along the Middlewood Way and over a boggy field (I’d kept my feet dry for 13 hours before this so was not happy!) we arrived back at the scout hut, finishing together after 13 hours and 16 minutes. It was the longest run in miles and time on feet for both Ben and I and we were pretty chuffed to come in 21st place out of 261 starters and 217 finishers. Double egg butty for supper/breakfast before dropping the other 2 off at home. Showered and in bed at 4am. Sunday felt like a big hangover!

Race was won by Rory Harris in 8 hours 19 minutes, missing out on his course record by 9 minutes. First woman was Jayne Lawton in 11 hours 1 minute.

This race also has the best race shirt ever, as perfectly modelled by Mr Simon Bayliss! 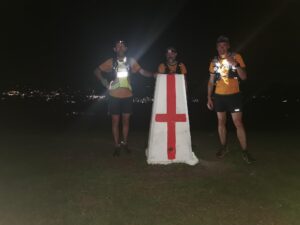 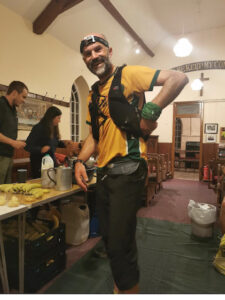 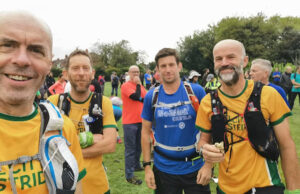 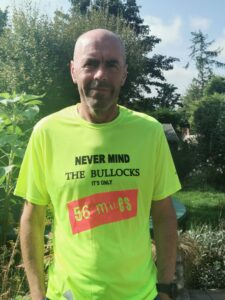