Devised in spring 2020 when it became clear that some of the big city marathons and half marathons might not be staged due to COVID-19, this three plus a bit lap event also included a seven and a half lap marathon. Entry was open to those capable of 1:15 (men) and 1:30 (women) with the threat that your entry would be withdrawn if not supported by Power of Ten.

With the race starting in Covid waves, the course was described as fast and flat on well maintained, closed roads, in a predominantly rural area around Pulford near Chester. These claims proved to be correct with a plethora of personal bests (69% of the field) including our own Nicola Birch in 89:40. The elite nature of this event is emphasised in that this placed Nicola as 18th woman but unfortunately 60th out of 61 finishers overall; brave of Nicola to toe the line with some very quick athletes in a small field. The first woman was Samantha Harrison (Charnwood) 69:48 with Calum Johnson (Gateshead)  first man in 63:44. This places Harrison’s half top ranked woman in the country this year with Johnson second ranked man behind Mo Farah although, admittedly, we haven’t been racing much recently. 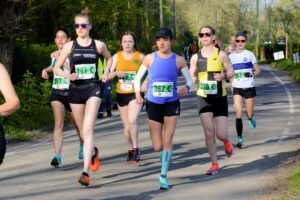 The marathon also provided some fireworks with the men’s pacer Jake Smith deciding to go for it at 17 miles, winning in in 2:11:00, running an Olympic qualifying time at his first ever marathon. Callan Moody of Serpentine RC was second in 2:11:38 and Reece Edwards of Belgrave Harriers third in 2:14:43. Aoife Cooke (Eagle AC, Cork, Ireland) was the winning female in 2:28:36, an Olympic qualifying time for her.