Well, a half marathon to round off the season, all very good, an outing in rural Derbyshire is surely what Sunday mornings are made for, and with the relatively mild weather we had been experiencing before that, made it a more enticing prospect. However…

No event happens in isolation, and the day before the date of the race, Storm Arwen rolled-in with snow, and an icy Arctic blast (with the disruption which usually results), Sheffield was badly affected and the sporting calendar was put on hold until responsible types could rule on whether it was actually safe to go-ahead, the answer was a universal “no” (certainly in Sheffield) where even the Hillsborough Parkrun, which prides itself in only cancelling due to the Tramlines festival taking-over the course (oh, and pandemic lock-downs), was forced to concede defeat in the face of the elements.

In the face of that, those who signed-up for the Clowne Half faced a nervous night, waiting for the results of the course inspection at 6:30 am the day of the race, cancellation was a real possibility, but the inspection by the Clowne team the evening before suggested that a go-ahead was possible (provisionally of course).

The final course inspection was favourable, and the green light notice was issued.

The initial challenge was getting there, a few people in Sheffield were unable to get there due to the sheets of thick ice that covered much of the hills in the city, those in the know will know that is quite a lot of it, and quite sensibly decided the risks were too much.

Those who were able to make the trip headed south unperturbed by the weather forecast warning of temperatures as low as -5 degrees (with wind-chill) in centigrade by the way, we hadn’t entered a new ice age.

Parking provision was plentiful, and Clowne town centre had little by way of residual snow or ice (very much unlike Sheffield just a few miles north).

A group of Striders formed up at the leisure centre in Clowne, which marked the starting point of the race, some dressed with an eye to the weather forecast, others (made of sterner stuff) were kitted-out just as they would be in the summer (hats-off to them).

There were a series of team photos outside, and we sensibly decided to return to the relative warmth of the leisure centre.

As the start time approached we assembled at the start line, and at the preordained time we were off. The “starter” was a mammoth by the way, its fur was probably quite an advantage in light of the conditions.

The waiting around in the biting wind was the hardest part, but once we had been dispatched we could generate our own warmth and things were looking up. Road conditions were good, there was the odd frozen puddle, but these were easily avoided.

The course is mostly rural, and is undulating. The uphill inclines are not overly steep, but do go on, and some sections (with low hedges) were particularly exposed to the northerly wind, and the wind-chill came back into play.

Many of the roads we were running on remained open and sometimes there was not the luxury of a pavement. On one such stretch I faced the indignity of being over-taken by a tractor (oh the shame).

At the finish, each finisher was handed a hoodie, of far more benefit to those already blessed with more race t-shirts than they know what to do with.

In general, I enjoyed the race and would do it again. It was certainly cold (and occasionally very much so), but such are the vagaries of the British weather. 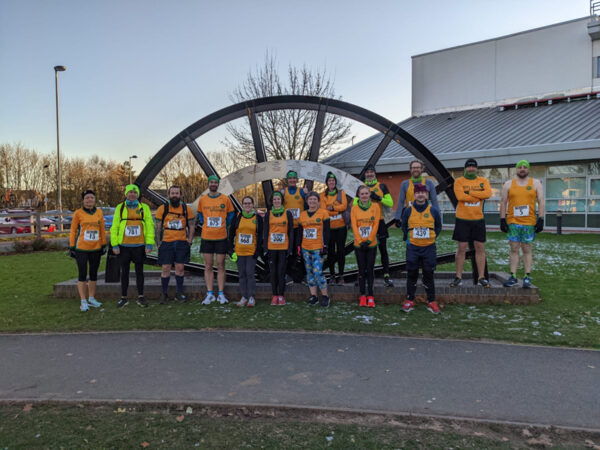 Striders at the Clowne Half 2021 (photo by Hayley Poodle)

Full results are available on the UK Results website.