Sunday 14th November, 2021.
Reports by Lucy Broom and Jamie Smith
This was the 5th year of the Derby 10 mile, which advertises itself as a flat and fast race with PB potential. It starts and finishes at Derby Arena and takes in the ‘scenic grounds of Elvaston Castle’. Starting from the arena meant plentiful parking and multiple sets of toilets; and even a velodrome above our heads, with actual cyclists going round, so it was all good. 21 striders headed to Derby to battle it out on the penultimate weekend of the road champs.
I had unfinished business with this race, having run it 2 years ago, to try and bag the women’s V45 10 mile record. That year, there was spectacular flooding 48 hours before the race, and the organisers somehow managed to re-route it in super quick time. From what I remember, it was less scenic grounds and more duel carriageway, which although less pretty, was probably even faster. Not for me though – I went out too quick that year and blew up horribly at mile 8, missing the record by a couple of minutes.
So, 2 years later, I was back with last year’s place for another crack. Racing conditions were perfect. I wasn’t sure about my condition, having had covid the week before, but turns out it had no lasting impact. I had a much better race this time – paced it well and felt good. By mile 7, I was starting to think the record might be possible, with enough miles the right side of 7 minute miling; and feeling like I had, if not a change of gear, then at least more of the same gear! What really helped was falling into step with a strong runner, around mile 8. We picked up speed, overtook a couple of people and then I clung onto him for the last painful mile!
When I crossed the line, my watch told me I had it by 11 seconds, which I didn’t dare believe until I saw it in print! I hadn’t realised it was quite so close and I’m so pleased I kept the pressure on myself right to the end.
It was great to catch up with fellow striders. I’ve missed that race camaraderie.  Lots of good times from everyone, but special mention to Dot Kesterton, who was first in her age category and set a women’s V65 10 mile record. She commented before the race that she could do anything (time-wise), because there wasn’t a previous record to beat. But she didn’t just do anything, she did a blistering 1.17.16, for an age grading of 93.96%. Truly sensational!  .   Report by Lucy Broom
and here’s some words from Jamie Smith 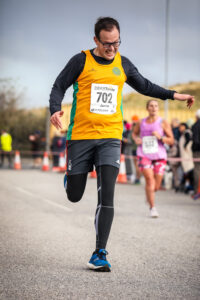 I signed up for the Derby 10 mile in the euphoria of completing the Sheffield Half, in the beautiful sunshine, whilst hydrating with a few pints of the finest real ale. I did not pay attention to the route…I skimmed through it and saw the words “scenic”, “fast”, “flat” and “PB course” and thought “yes I will have some of that”.

Once October came and I had completed drying out from the Worksop Half, my attention turned to my next race in two weeks’ time. I gulped when the start and finish point was “that place”. Now a lot of you reading this will be thinking, what on earth is he talking about, bit over-dramatic isn’t it?

Well, to clear things up Derby Arena is in Pride(less) Park which is also the home of Derby County Football Club. This isn’t particularly a place that people like me (Nottingham Forest fans) are welcomed with open arms, it’s certainly never been described as “scenic” but I might be biased. Brian Clough is one of the only figures that unites the two and successfully straddled the divide, so much so, the A52 link road between the two cities is named after him it is such a feat.

As you can therefore imagine, I was very happy to enter the race under the cover of the green and gold of the Striders. I decided to turn my unease into productive energy as I thought at least I had added incentive to get away from the start point and finish as quickly as possible.

The race started at 11.02 as it was Remembrance Sunday, and the two minutes silence was impeccably observed by all in attendance. It was an unseasonably warm and sunny morning, and the previous male and female course records were subsequently broken. Ross Millington and Jip Vastenburg both of Stockport Harriers AC, broke the records with times of 48:37 and 56:17 respectively.

Despite my incentive to record a quick time, I was alas a little far away from a course record. I was pleased to average 8-minute mile pace for 10 miles which was the first time I had managed a time that quick in a race since the last Percy Pud in 2019. As a result, I shaved 2 minutes and 30 seconds off my personal best time and there were strong performances across all the Striders who raced.  . The attached (flattering) photo indicates the effort expended at the end to secure a PB and swift exit whilst also highlighting my cheeky nod to my Forest roots in my chosen running attire.

In all seriousness though, I would highly recommend this race as a good introduction to running the distance if you’ve not tried it before. The organisation was excellent from arrival with plentiful parking through to the call to start and marshalling.

Well done to all!

Link to overall results see below