Being a meteorological fan and a chionophile of the nth degree the shenanigans of Saturday delighted me but I was extremely pleased that, despite Derby town centre feeling like the arctic, the city and it’s environs seemed to have escaped the worst of the precipitation thereby rendering it ice free. Whilst most Striders seemed to have headed off to Donny or Clowne I was pleased to fist bump one member pre-run and was passed by another Strider en-route; so at least three of us! (I’ve since discovered I was one of five).

The route is flat, not everyone’s cup of tea, but delightful. Having allowed myself to mingle at the start with the one hour fortyfivers I found myself encouraged to up my game and we set off at a sprightly pace in clear blue sky and low angle sun, leaving the city centre by way of St Peter’s Street and heading up London Road towards the lovely village of Elvaston. At the magisterial Elvaston Castle, which proved to be the approximate half way point the route turned to return to Derby following the river Derwent.

It was in the grounds of the castle where the best banter was to be had, as we passed the all important 7 mile mark, if you know what I mean. Having set off rather too eagerly it was at this point that I was caught by the 1 hour 50 mins pacer, accompanied by his gaggle of fellow runners hoping for a similar time. He hailed me heartily as a Strider; Sheffield being his home city! I expressed a hope of a similar finishing time so he said “stick with me kid” and pointed to his right ankle. This proved useful as he also was very to keen to loudly announce the huge frozen puddles on the riverside path which resembled micro Northwest passages having been set upon up by numerous runners ahead of me!

Sadly I was unable to match his pace throughout the rest of the course but was pleased that the 1 hour 55 pacer did not catch me! A great course and a much enjoyed run.

1683 runners lined up for the Derby Half Marathon. Patrick Roddy of Thames Hare & Hounds was the winner of the men’s race, in 01:07:30. Winner of the women’s race was Gabriella Moriarty of Northampton AC, in a time of 01:21:59. Five Striders took part.

Full results can be found on the Chip Timing website. 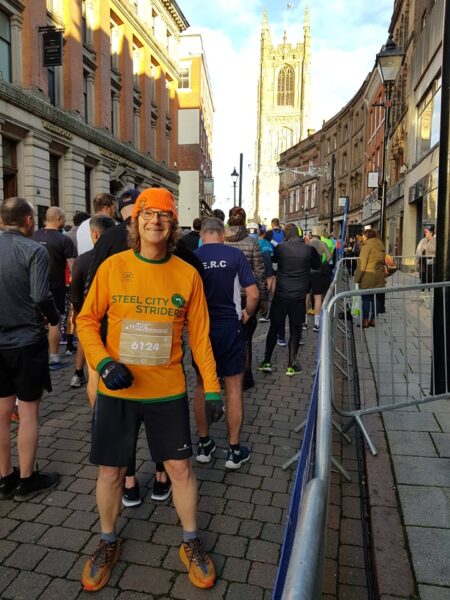