I was thwarted from running the Dambuster 10 since 2018……but today is the day.

I arrived at Fairholmes at ~0800 and wow what a beautiful clear morning. Made my way to the registration tent to pick up my number and timing chip and spotted fellow Striders Caroline Brash & Helen Smith.

Back to the car to pin the number on my race colours, sip of strong coffee, energy gel, bolt on my water bottle belt and jogged down to the start line.

We shared some pre-race banter and were nervous but keen to start running this amazing route.

Organiser brief with a few minutes to go only to discover we were running the route clockwise….was anticipating anti-clockwise.

The race starts with about 20m of ‘trail running’ then onto the road, up to the mini-roundabout and right to start the initial climb. You know it’s going to be a tough run when you are breathing hard & sweating after a few hundred metres. On towards Howden dam, with runners sorting out their positions and all working hard.

We had to contend with some cars making their way towards Howden but all nice careful driving. Passed the first cameraman at ~3 miles….we put on our best red faces for Mick Hall. It felt special running along the road covered in orange pine needles and the scenery was breathtaking….sun filtering through the trees, hills and trees reflected in the mirrored surface of Howden. Now we are running downhill on ‘The Loop’ and everything feels good until you look across the water and see runners tearing along….some very fast people. As we get to the turn on the loop we start going uphill again….the sun suddenly feels very hot. The runner that caught up with me on the descent fades away as a hill hardened Strider drops a gear and forges upwards (thanks Roger/Richard for those never ending Graves hill sessions 😉 ).

We arrive at the first water station, where tarmac yields to track. I was anticipating grabbing a cup of water and zapping it into my water bottle….but no. The attendant insisted on picking up a giant jug and pouring water into my bottle…..very slowly. Then onto the track, downhill and onto a short but savage hill. It takes a bit to recover from that climb, but pick the pace back up on the undulating track, through an opened gate and down to the bridge. Zoom across the bridge, the sparkling water looks enticing, and left towards the hairpin turn.

This, to me, is the last hilly effort, but on a surface that has loose stones, and ruts. We have to contend with closed gates, which slows things but then we are through and on to open track that disappears into the trees in the distance. The pace quickens, avoiding walkers and cyclists, and then back into the trees ~3.5 miles to go. This section, undulations and flat sections, should be fast but struggle to find the sub-8 pace. I come across 2 young ladies taking a selfie, shout something like ‘no time for selfies…we are racing’ and dash past. Omg 2 minutes later I hear pounding feet behind me…..I’m being hunted by the selfie-takers. We are now running side-by-side and I suggest that they could stop for another picture of Howden dam (~2.5 miles to go)….they decline and ease ahead. Closing on the Derwent dam a runner stops and starts walking, as I pass I say something like ‘keep going buddy’, 3 minutes later he overtakes me……that should be illegal 😉

Back on tarmac we charge down to the final hairpin and down the steep(ish) road….am flying. High five to a cyclist coming up…..nearly take him off the bike, then bend left and hard right into the final run in. I see 2 gold tops flickering in the trees up the hill, as fellow Striders Caroline & Helen charge into view. Great sight. Phew hard work but enjoyed it immensely……once I had recovered.

Time for coffee, Mars bars and a be-medalled team selfie 🙂

On a personal note I had that lingering feeling that I did not run my best for whatever reason, but 1st in my age group (hopefully there was more than 1 in this group), and 11 PRs made me realise that I did well 🙂 I am looking forward to next year’s event. 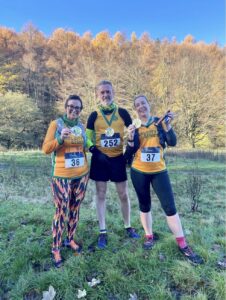 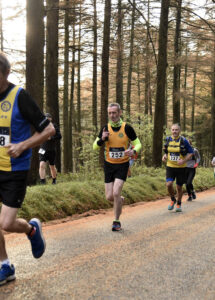 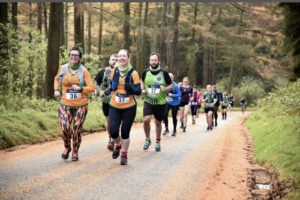