The qualifier for the England Masters Representation race was at Telford in December 2019. All races from March 2020 were cancelled including the EA Masters race in Bristol. Rolling over to 2021 the first representative 10K was held last weekend at Kew Gardens, South London.

Nearing the end of my age group, F65-69 I knew it would be difficult to compete at the same level as women just coming into the category but was pleased to win a place and arrived at Kew on a lovely late summer morning along with Striders Fiona Jeffries F50-54 and Robert Hoffman, M45-49.

Eyeing up the other Masters athletes at the start I noticed an awful lot of them were wearing the carbon fibre soled ‘go faster’ or ‘cheat’ shoes, depending on your point of view. Runners told me they could potentially knock more than a minute off a 10K race. I had my Saucony Kinvara lightweight shoe, familiar and comfortable.

There were 4 other F65’s in my group, all younger than me. At the gun, I decided to make a decisive move to dominate the age group. I wasn’t confident I could catch up once they had surged forward. One particular competitor gave me cause for concern. She was gaining steadily throughout the run which twisted and turned around the famous glass houses of the gardens with a brief straight section along the Thames. A huge effort was needed to secure a win and so I gave the finishing stages all I had to cross the line in 47.34 chip, a mere 4 seconds ahead of her. Those speedy intervals on tired legs I’ve been practicing over the summer really helped. I secured Gold and England F65 Champion 2021 which is a very encouraging way to start my journey towards my new age group next year.

On the train to Kew I met and talked to a man who looked very tired after a long day’s work. He is a Syrian refugee, a teacher of English doing menial work in London while he goes through the long and uncertain processes to achieve legal status. He had travelled overland through Europe to Calais and arrived on this island in a small boat. The whole experience of listening to his story was disturbing and humbling. This man and thousands more had experienced trauma unlike any I have ever had to. Nontheless he carried my case to my hotel, shook my hand and wished me luck for my race. 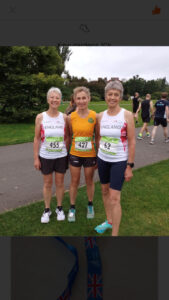 A reminder to anyone who wants to run for the British Masters Athletics Federation, BMAF, you need to be 35 plus years old and keen to run with other athletes. No qualifying times are required except to run for England in the Home Internationals.

Link to full results for all events at the Richmond running festival are here.