I signed up to run the Eyam Half Marathon on the 18th December 2019. Originally due to take place in May 2020, the race has been delayed three times (eventually falling just one week after the Sheffield Half, which I’d also committed to), and so it was that 656 days after I’d paid my £25, I found myself on the start line in the famous “plague village” of Eyam – which feels a little more poignant now than it otherwise might have done.
I really didn’t enjoy my experience of running the Sheffield Half, to the extent I’d have probably pulled out at 8 miles had I not been running for charity, but it did at least prove that I was capable of doing the distance – so I’d pledged that I just wanted to soak up the atmosphere and try to have a nice time, despite the 500m+ elevation gain! It was an absolutely glorious day, brisk chilly wind aside, and it was lovely to catch up with a few fellow Striders before the race. As well as the 18 month hiatus due to Covid-19, the Eyam Half had previously been cancelled due to road subsidence, and it seemed like the locals were pleased to have it back with loads of people lining the village square to see us off. My nerves were somehow simultaneously jangled and settled by the excellent compere, who delighted in telling us at length just how tough the route was, before deciding we should all count ourselves lucky we weren’t running round the Himalayas. Can you adopt extra grandads?
The route began with a loop around Eyam, and I set off with lovely Maggie who had me in absolute awe at tales of her recent 120km ultra, before the first climb up past the youth hostel, and up, and up, and up some more. Every time we turned a corner my breath was taken away, mainly by the incredible views of rolling hills and sweeping countryside, but also a little bit by the rather vigorous wind, which made it pretty hard going along the top through Bretton. But what goes up must come down and miles 4 to 9 allowed me to find my stride a bit more, with gentle undulation by Great Hucklow Wood giving way to a lovely lengthy descent through Abney in the vague direction of Hathersage. We even had a parade of classic cars passing us just to break up the cows a bit.
Miles 9-12 were back to being predominantly uphill and there was a LOT of walking for me at this stage (along with many others, meaning I didn’t get overtaken much, although I cheered on Christine as she powered past me with a friendly hello!). The support around the course and especially on this section was great, despite it being quite remote in places there were plenty of locals out banging saucepans and children chucking Jelly Babies at us, and the volunteers were all really friendly too. Particular shoutout to the marshal just past the 12 mile marker who exclaimed I looked “fresh as a lickle daisy” – clearly I hadn’t exerted myself enough up all of those hills!
The last mile was nice and easy, downhill back into Eyam before a long, sweeping finishing straight running right through the village and a crowd of speedy Striders cheering me over the line (including my newly transferred over husband Jim, who’s the current leader in the Road Race Championship having run all three of the opening races, I promise he’s not always quite so disturbingly enthusiastic). I’d hoped for sub 2.20 and juuuuust squeaked under at 2.19.48. Rewards for finishers were a t-shirt and a branded orange, which I personally found much more useful than a medal and which tasted wonderful alongside my well deserved pint of bitter shandy. (As an aside, all runners of the kids 2.1km fun run got a certificate signed by TOM CRUISE!)
I don’t think the smile came off my face the whole way round this race – it might not have been my fastest, but it was such a rewarding route and such a beautiful day that I couldn’t help but thoroughly enjoy myself.

The race was won by Luke Beresford of Ripley Running Club in a time of 1:20:02

There were a total of 292 finishers 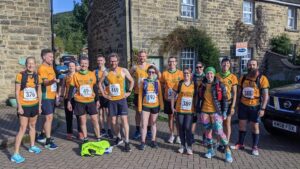