I’ll save any hopefully baited breaths to let you all know that this isn’t a tale of triumph over aching legs and burnings lungs. I didn’t achieve a PB (in fact, it was 33 minutes slower than my PB, and 18 minutes slower than my first half) and there wasn’t a sprint finish. There was, however, a brilliantly sunny day and a route that was part scenic and part “I swear we’ve already run this before” that kept us all happy and challenged.

The route began as an out-and-back along Portway; a road usually full of traffic, which sadly also meant avoiding occasional road kill. Between a river and fenced woodland, with the occasional rockface dotted with graffiti or climbers, it was pleasant and undulating without being notably hilly. However, once the halfway mark hit and runners were harbor-side and headed towards central Bristol, some truly Sheffield-style hills appeared, where this pregnant lady became That Annoying Runner who stopped to take photos to avoid overdoing it. Sadly, none of Bristol’s famous hot air balloons floated by, but the Clifton Suspension Bridge was still a typically Bristol landmark to please anyone looking for anything stereotypically Bristol.

And then there were more hills, and somehow more. The closer the finish line became, the steeper the hills were. Some beautiful buildings and parks were momentarily distracting, but the slightly maze-like feel to the run and sudden company of the 10k runners created a slight haze of crowding and confusion.

500m to go and a well-meaning spectator shouted “you’ve only got half a mile to go!”. Dread set in. The sun was already making the day warmer than anyone had anticipated, it had been several miles since the last water stop, and the 22-week old baby bump was feeling rather heavier than usual. Of course, the lunchtime alcohol my new friend had consumed was likely the culprit of the confusion, and suddenly the finish line appeared, with half marathon and 10k runners arriving in tandem, with well-organised signage showing times per wave, and the usual nut bar and water bottle were waiting with our finishers tops and medals in Millenium Square. 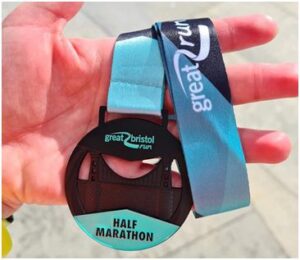 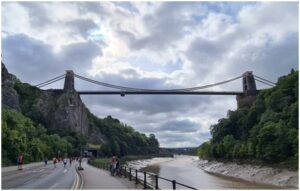 Of course, the Great Run series is expensive for those who don’t get affiliated party discounts, and perhaps for them they might feel a little disappointed with the event compared to others. Overall though, the music stations and enthusiastic marshals would’ve made the event a good one even if the crowds hadn’t turned up en masse. The tracking app was really helpful and although signage was lacking, when you found where to go it was well-organised and went smoothly. The medal was quite sleek and different to the usual, which is always a nice perk.  Of course, I am biased with my pregnancy hormones and this being my first race post-COVID – and likely last race for a long while yet! – but it was a good day out, even if it was missing some of you in the green & gold to cheer on.

The race was initially won by Omar Ahmed of Birchfield Harriers who had entered the 10k but took a wrong turn and ran the half marathon.  He was disqualified for running the wrong race and Chris Thompson (Aldershot Farnham and District AC) was declared the winner in a time of  67 minutes.   There is no information about winning woman or link to full results which are, as yet, provisional.

Michelle was the only Strider.