I, like many of us, entered the Sheffield Half Marathon many months ago “BC”, then shoved the race number in a drawer and forgot about it!

Separately my daughter had entered the Great Run Manchester Half with a charity fundraising place for the Christie Hospital, which fell on the same day as the rescheduled Sheffield event. She was my lockdown running buddy before we were all allowed to mix again earlier this year but she is finally escaping in a couple of weeks to the bright lights of London and a new job now that life is up and running again. It dawned on me that our regular runs together are coming to an end and so I decided I should join her and support her in Manchester so the Sheffield Half became Manchester Half with 10 days to go.

I don’t generally do much ‘distance’ road running so 13 tarmac miles was a bit of a shock to my definitely undertrained legs, as was the relentless forward motion on flat City terrain when I’m used to off road & walking up the hills (I can walk them faster than I can run them!). There was a bit of up and down going along the Mancunian Way but absolutely nothing to compare to the real hills of Sheffield!

I haven’t run in a big mass event like this for many years but it was all well organised and straight forward with an out & back to the Etihad and then out and back to Old Trafford, finishing with lots of noise & cheers on Deansgate. There was plenty support in the more central areas, regular music zones & a run through shower on the second out and back of the race, which I was glad for in the heat.

As Eilish McColgan commented after her win in the 10k later that day, there was a slight uphill and a strong headwind in the last 400m so I feel better about my inability to really sprint at the end and finish with my so called running buddy who had left me at that point. I was all done at the end, whereas the youngster was “buzzing” and “could just carry on running a bit longer if we were allowed!” She clearly didn’t need the support and she immediately signed up for the next Sheffield Half in the spring when she got home so maybe we will run together again (if I can keep up!).

Got the usual T-shirt, medal & goody bag at the end & overall it was a well organised enjoyable event but I prefer smaller & more scenic – any excuse to slow down & take in the view at the top of a big hill gets my vote!

First runner to finish this year’s Great Manchester Run Half Marathon was Luke Cotter of Rotherham Harriers & AC, in a time of 01:10:29. First woman over the line was Nicola Jackson, finishing 14th overall, in a time of 01:21:57. Strider Joanne Battersby finished 6th in her age category, and Roger Brookes continued the family theme, crossing the finish line with his daughter, Katie.

Full results can be found on the Great Run website 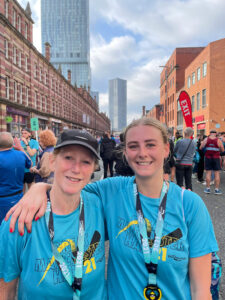 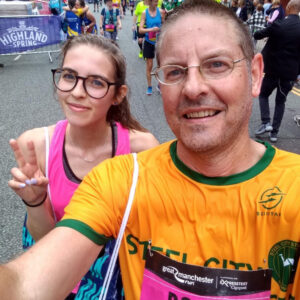