Unusually for the Gallop there was no hail, high winds or snow this year. There was however rain, and quite a lot of it on the Monsal trail. Maybe it has something to do with the Gallop being in October this year instead of its usual home of early March. Maybe I can also thank October for the great running conditions which allowed me a course PB of 13 minutes and the very unusual (if not unique) claim of being first Strider home. Can’t see that happening again!

The race was as good as ever. Sergei paced me well up until Great Longstone when I passed him and he pleaded with me to wait for him! Ha, fat chance. I then regularly traded places with a couple of guys all the way to the end, chatting to them as we tortured ourselves up out of Baslow. I beat one of them and lost to the other on the downhill stretch into Grindleford. Whilst I was tiring after Baslow I still managed to overtake a few others who were obviously feeling it worse than me.

After 21.6 miles, the coffee, soup and warm welcome back at Grindleford was very well received. It did however seem strange not to be shivering, soaked, battered by hail or windswept. Maybe it should keep its new October home. Then again, isn’t that part of the attraction? See you all on the start line in March! 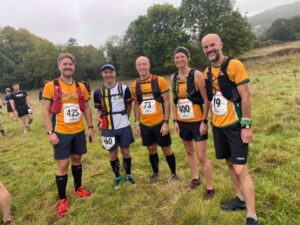