As suggested in the name, all distances in the Gruesome Twosome are run in teams of two, with the non-virtual versions setting out on a sunny Saturday morning from the village of Swallow, in Lincolnshire. 107 teams crossed the finish line in the half marathon, including mixed pair team Jem & Scotty, made up of Strider Jemma Anderson and David Scott of Cleethorpes Tri Club.

Draft results can be found on the RESULTSBASE website. 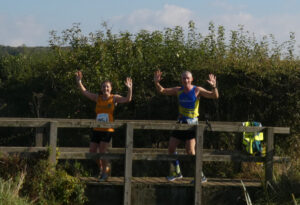