When I write a race report, I always find that I process what happened to me in and around the race, so I apologise for the length of this report. Firstly, let me just rave about Hardmoors races. They’re brilliant. If you’ve never done a Hardmoors race, you should. Hardmoors are known for their ultra distances (the 110, 55 and 60 are iconic races IMO) yet they also offer a Trail Marathon Series across the year. At each marathon event there’s also a half marathon and a 10k. They’re also known as being great value as you definitely get more miles than you pay for. This race was 29.22 miles and was worth every penny.

Back to me… I found lockdown really tough in terms of keeping up my distance and fitness. I kept running, yet I was absolutely not training. I have also gained at least 10lb, which I think is pretty standard. In January, I got a PT and I started working really hard. I’m now working full time and having a regime I’m paying for has helped me to fit in training around my commute and work. I did a 50k in April (the Longhorn) and felt pretty good, so entered a 50 miler in September in The Peak District (Limestone 50). Training was going well. Until blinking Covid hit in June and we became a plague house for 4 weeks. Isolation after isolation – and then I came down with it.

It was while I was ill and feeling very sorry for myself that I managed to buy a Farndale Full place. I should have been doing really high mileage weeks, yet isolation then illness had put paid to that. I had in my head that I would do Farndale as a good long run before the Limestone 50 on September 5th.

My isolation finished on July 9th. I went *running* on the 10th. My chest felt pretty good, but my legs had just forgotten how to run. I tried to build up carefully, yet I was gutted at where I was in terms of progress.

It wasn’t until the Wednesday before Farndale that I actually thought my legs felt okay on a run.

I knew I had the endurance to finish it, and I have missed my Hardmoors Family, so I was determined to do this race. I also thought it would give me a good idea of where I was in terms of doing a 50 miler.

It was a beautiful morning. I arrived at Hutton-le-hole in good time. There were plenty of loos in the car park, which made me very happy. I registered, passed kit check and changed from a tee shirt into a vest top as it was so warm. I opted for arm sleeves as well for the start.

The race course is beautiful and I had a fantastic day for it. I had the route on my Suunto, a hard copy of the map and a route description. I didn’t know the route at all, and I hate being lost. Navigation is part of the fun, yet it can be really stressful if you’re not prepared. I had gathered that there was a glitch on the GPX at the 13.5 checkpoint, so I had marked up my maps with the information.

When it comes to nav, I’m a firm believer that the person in front of you is lost and the person behind you is following you. You have to take responsibility for your nav and you  cannot expect to hang onto someone ahead of you.

At around 7.5 miles, I checked my nav at a junction, even though I could see at least 9 other runners ahead of me. They had all gone the wrong way. I called ahead and one person turned around, Rebecca. I had chatted to her at the start. She had also doubted the route, yet others around her were really certain it was the right way. It is hard when you can see the field ahead of you to decide to go a different way. We checked our watches, the OS app on our phones, the hard map and the route description. Yep. We were certain. They had all gone the wrong way. We shouted, but folks were about half a mile away from us by this time. I blew my whistle, yet no one turned around. It was horrible, but we just had to make the decision to go.

We started down a trail that was a hard left, and quickly we were both off the route according to our watches. Oh pants. After all that time were the 8 folks ahead of us correct after all?  I beat through some bracken for about 30 yards to the right of the track and glimpsed a bit of tape (tricky bits of the route are taped.) We had picked up a very obvious trail, yet the actual route was a very narrow path that was very overgrown. We picked up this path and we were bang on the GPX. We could just see another bit of tape in the distance. We arrived at the 9.5mile checkpoint and told the marshalls what had happened, then off we went.

Rebecca and I were both quite thrown by the fact that we could have easily gone monumentally wrong. We talked through what had happened over and over again. The weather was perfect and the scenery was stunning. I tried to put the nav stress behind us and ploughed on.

From around 20 miles I was tiring. I made every effort to keep up my pace and continued to trot as much as possible. The climbs were really taking it out of me. I kept eating and drinking as much as possible. There were Lotus biscuits and Chia Charge bars at the checkpoints…they were amazing. I kept nibbling, sipping and going. While you’re moving, you’re racing. I’m always back of the pack in ultra races, yet I didn’t feel strong like I normally do.

I did the last mile in around 11min 30s which I was pleased with, yet I felt really wiped at the end. Over the last few days I’ve decided to move from the 50 mile distance on September 5th to the 33 miler. I’d rather do 33 miles and feel like I’m rebuilding post-Covid than wipe myself out for the Autumn.

I’ve entered the Hardmoors 55 in March 2022 and I now need to decide if that is going to be my A-race or if I’ll be using that as a training distance for a longer race in 2022. 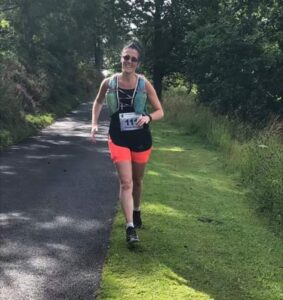