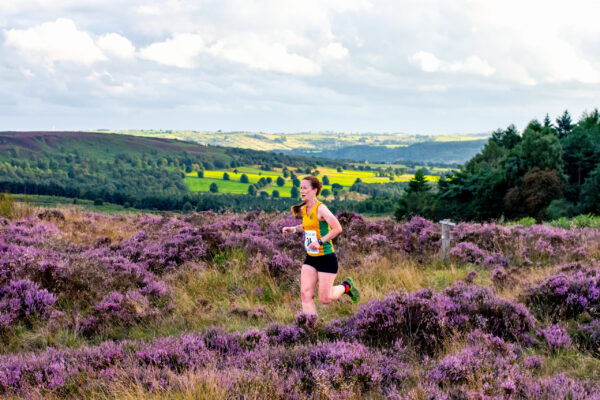 Caroline B on her way to a course record. Photo credit: Mehul Vaitha

This was the third running of Hob Hurst’s race, which starts in the lovely little village of Beeley (which was weirdly full of police) and runs up a hill then back down again, like a “traditional” fell race. I turned up nice and early, collected my number (and timing chip! Very road race.) and joined a long toilet queue before looking round for familiar faces. Only four Striders were in evidence at the start, all of whom had run Ricky’s Race the night before and one of whom (Caroline B) had set a course record.

Eventually everyone was registered and we were off. The race is a good mixture of terrain, starting off with a longish but not too technical climb through woodland, then out onto moorland for the fast climb up to Hob Hurst’s bronze age burial mound thingy at the top of the hill, dodging faster runners who are coming back down the out-and-back bit and swallowing at least one fly. This bit went pretty well for me, though I started too far back down the field so was in a bit of traffic early on.

I definitely struggled on the second half, which begins with a punishing kilometre or so down a dead straight farm track where I struggled for speed and breath, then into a really fun narrow path down through some extremely tall undergrowth. Then you’re out into fields, through a farmyard, complete with friendly farmer and family, before a mean little climb and an eyeballs-out descent back into the village. Judging by the number of people that overtook me, my eyeballs weren’t out enough.

I wasn’t surprised to be the last Strider back (I also got beaten by noted Sheffield street artist Kid Acne, who has now thrashed me in the only two fell races he’s ever run) but I was a bit annoyed I hadn’t done better on the descent. The annoyance didn’t last. A Strider setting a course record, and getting back to Sheffield in time to be the last customer at the Admiral chippy, soon cheered me up. I’m finding it hard to care that I’m not running as well as I want to be though. The joy of being back racing (and basking in the reflected glory of fellow Striders) will do me for now.

(Postscript: after I wrote that I looked at my 2018 time, and it turns out I was over two and a half minutes faster this year. Ha!)

The race was won by Greg Hopkinson of Matlock AC, in 31:28, but more importantly the first woman back was Caroline Brock, in a course record of 35:17. She’s won this race every time it’s been run!