Hornsea 10K (or “Oh I Do Like a Day Beside the Seaside”, to give it its full name)

As we all know, racing has been limited or non-existent over the past year. A combination of injury and Covid restrictions meant that my last race was Percy Pud 2020 (where I PB’d!). As much as I’ve enjoyed virtual races and lockdown challenges, I’ve been really looking forward to the restart of racing with actual people.

So, when I was told that Grim Up North were putting on a series of races at Hornsea whilst I was on holiday just up the coast, I decided to sign up. Like many Grim Up North races, they offered a range of distances from 5K to Marathon. Fitness and endurance not being what it once was, I went for the 10K race.

The race started close to the seafront at Hornsea, and each distance was an out-and-back along the Trans Pennine Trail towards Hull – a former railway line. As I live close to the TPT at Rother Valley, this was familiar territory, just a bit flatter. It was great weather – cool, dry, sunny and relatively still – and the course was fairly sheltered by trees alongside.

Runners were set off at 10-minute intervals in groups of 6, in line with current restrictions etc. That – combined with the various distances underway – meant that whilst you weren’t running in a pack, you passed plenty of other runners in either direction, which made for a good atmosphere. Grim Up North seem to have a really friendly following in the local running community, which added to the feel of the race, with plenty of encouragement between runners.

The finish line was back at the seafront, and I crossed the line in 52:59 – although as it seemed to measure a touch short on my watch, I made up the distance beyond the finish line in 55:00 so I didn’t have to repeat the distance for the Iders 10k entry.

I could have been unhappy with a time over 10 minutes slower than my last 10k race, but it was just great to be taking part in a race, and it was a 4-minute improvement on my 10K entry for the YVAA Virtual GP, which shows what a race-day atmosphere gives you.

The goody bag included chocolate and beer, as well as a medal big enough to eat your dinner off. I had fish, chips and curry sauce on the seafront afterwards, which finished the race off nicely.

As there were loads of races, I won’t detail the winners of each, but the 10K race was won by Samantha Dury (unaffiliated) in 41:57 and first male was Tom Carrington (Scarborough athletic club) in 43:12.

I was the only Strider in any of the races, as far as I can tell. Full results are available here. 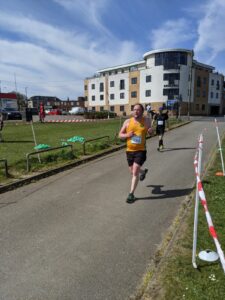