The Hornsea Trail Running Festival is a weekend of races organised by It’s Grim up North Running. On each day there was a choice of race distances: marathon, 20 mile, half marathon, 10km or 5km – all out and back along the TPT on the course of the former Hull to Hornsea railway line. In the 20 mile race on the Saturday Striders were represented by Sarah Percival, Helen Royles-Jones, Rosie Smith and me. On the Sunday Bethan Varney ran in the 20 mile race.

As with all GRIM events there were no mile markers on the trails, very few marshals and limited water and feed stations – competitors are expected to carry there own water etc. At the end of the race there was the GRIM trademark blingy medal, chocolate bar, can of beer and free cakes.

The Saturday race was held on a cool, overcast day, perfect for racing. Most GRIM events are low key with each individual race within an event attracting perhaps a couple of dozen runners. However the number of competitors in this particular 20 mile race was swelled considerably by runners preparing for one of the 4 major marathons due to take place across the four weekends of October, three of them having been rearranged from earlier in the year when Covid restrictions were still in place. Sarah and I raced together and we got our pacing just right, running at a consistent speed throughout. The hardest part was resisting the temptation to go too fast at the mass start. Sarah set another p.b. at this distance. 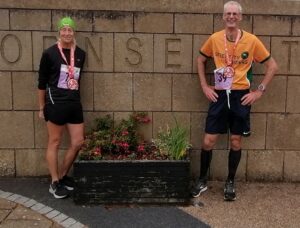 There was a big turn out from HRRC – including many familiar faces from former Striders – and they dominated the higher places in the race winning both the male and female race. Subsequent posts on their facebook page suggested that some of their runners were not happy bunnies however. It could be that they expected the full on treatment of a large road race rather than the low key, easy going atmosphere that is the trademark of all GRIM events. They were none too pleased with the fact that the course was a third of a mile short. It’s hard to disagree with the later sentiment since is takes some doing to get the distance wrong on an out and back course!

By the Sunday the organisers had amended the length of the course so that it was a full 20 miles and the sun had made an unwelcome appearance making it very warm for the runners and much less conductive to fast times than the previous day. Strider Bethan Varney set a p.b. and won the women’s race.

For the 4th September:
Simon Bennett (HRRC) won the race in 2:10:26, Natalie Neville (HRRC) was first female in a time of 2:18:52.  The link to the full results is here. Striders results were as follows:

For the 5th September:
Stephen Tether (Lonely Goat) won the race in 2:02:02, Bethan Varney (Steel City Striders) was first female in a time of 2:46:37.  Link to full results here.  Striders results were as follows: