This event, last held in November 2019, is a gem. Described by Jordan Moat as “awesome” the race raised a grand total of £505 for The British Heart Foundation in memory of Kimberworth members Ken Chapman and James Smith who both succumbed to heart issues during the last couple of years.

The race itself had a new start and finish this year due to building works at the Rotherham end of the Tinsley canal and included a loop of the Blackburn Meadows nature reserve. 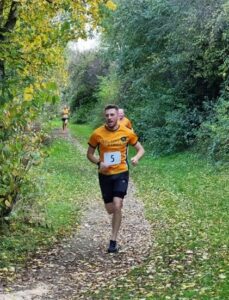 Jordan Moat with Danny Bent being chased down by Abbie Pearse

All the good training books emphasise how important it is to get the carbohydrates and protein down as soon as possible after a workout. As usual, Kimberworth pulled out all the stops to put on a superb spread at the Travellers with the tables groaning with food and all of this for your £5 entry fee. 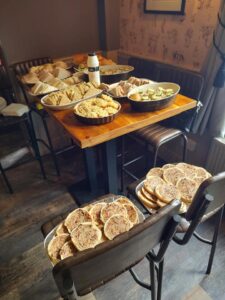 No room at the inn? Use the chairs as well.

With thanks to Pat Rooney for the invitation to take part and to Kimberworth Striders for their generosity  .