Friday 1st October saw the return of the annual Ladybower50 race series, organised by Rivelin Running Events. For those unfamiliar with this event, it is a series of 3 races around Ladybower and Derwent Reservoirs. Runners can opt for 20 miles, 35 miles or 50 miles (50.9 actually but who’s counting!) The route is the same for all three – you just add an extra 15-mile loop for each of the longer distances.

It is slightly unconventional to hold a race on a Friday, but this had become necessary due to a last-minute change of requirements from the land-owners. This did unfortunately cause a few runners to withdraw from the event, but luckily Lee Kenton and I could both still make the new date and so dutifully set our alarms for 5:30 am on a typically grey and wet October Friday morning to attempt the full 50 miles.

Both of us had unfinished business with this event and it’s not an understatement to say that completing it had become something of an obsession. Injuries had resulted in a painful DNF for me the previous year, and while Lee had gone on after my exit to drag himself over the finish line, it had not been in the time or fashion he had hoped for. The bar was set for both of us to come back, have another crack and finally do this race justice.

35 runners gathered at the start line, in a lay-by near the Fairholmes visitor centre, and nervously assessed the clouds overhead. The forecast had looked extremely miserable but it seemed that luck was on our side and the clouds were possibly starting to thin out. Waterproof jackets were put on and taken off and then put on again in a panic with 30 seconds to go. There was a quick 3, 2, 1 and then suddenly we were off.

The route starts with a small 5-mile loop of Ladybower reservoir, heading anti-clockwise through the woods, across the grass and over the bridge before returning along the other side. It is an odd thing to be running alongside people doing such vastly different distances, with very different goals and race strategies. The beauty of this event, though, is that it seems to encourage instant camaraderie and a sense of togetherness. There’s banter at the beginning and a good bit of chat with the other runners during this first short loop. Soon afterwards, however, everyone gets spread out and you find yourself a long way from anyone else and a long, long way from the finish line.

The initial 5 miles ticked by quite easily and then the first of the three 15-mile loops was upon us. These loops take you around Ladybower again and then around Derwent and Howden too. The first one went by without incident and we reached the 20-mile checkpoint back in the lay-by in good time and with plenty of energy for the next loop. As it turns out, a lot can change during the course of this second lap. Early enthusiasm begins to wane, energy levels become depleted and the realisation that this all needs to be done a third time can weigh heavily on the minds of even the most cheerful runner. Miles start to drag and the very thought of spending a day running in circles around a large reservoir suddenly seems preposterous. What were we thinking? Why would anyone choose to spend their Friday doing this? However, as we approached the lay-by again at 35 miles – the final checkpoint and the start of the final lap – a funny thing happened. The excitement and adrenaline took over and I found myself almost skipping towards it, delighted that I would not be pulling out with injury this time and that I would finally experience that last loop that had eluded me the previous year. I looked over at Lee, expecting to see my joy reflected. “I think I need to be sick”, he said.

Fortunately, this wave of nausea was soon over-come with a ‘you’ll be reyt’ pat on the back and a slice of pizza and we continued on our way. This may sound heartless, but having spent many, many hours training with Lee over the last 18 months I know what an extraordinarily capable runner he is. I was certain that this was a blip and not the start of a more serious problem. In all the excitement I made a potentially serious error and forgot to top up my water but luckily this could be rectified at the water station at 40 miles. From there followed 10.9 miles of hard, hard work. We did our best to distract ourselves with a few rounds of the alphabet game and an in-depth discussion of what we would put in Room 101 (ultramarathons being top of the list at that point!), but there was no hiding from the fact that we were both exhausted. We continued with the run/walk strategy we had adopted for the whole race, made sure we continued to eat (although Lee by this point was looking green at the mere suggestion of a jelly baby) and kept on moving slowly forward.

As if by magic, at just the right moment my husband appeared from nowhere on his bike to give us some much-needed encouragement and we were soon making good progress once more. We were then joined for the final 5 miles by another fellow Strider, Peter Keats, and those last few miles were among the most enjoyable of the whole race. Before long we were back at the dam and within sight of the finish line.

The last mile is mostly flat/downhill but with a 200m sting in the tail. Going up-hill to the finish line is hard after 50 miles but we ran it all. Our goal had been to finish the race and to finish it feeling strong and we did just that. With times of 09:39:24 and 09:39:25 we were both over the moon. As an added bonus, I also finished as 1st Lady for the first (and almost certainly last!) time in my life, and was rewarded with a brand new pair of Ininji socks as a prize.

All in all, this was another great local event from Rivelin Running Events. Well organised, friendly, inclusive and well supported. Highly recommended as a first foray into the world of ultra-running, mainly because you can’t get lost!

35 runners took part in the Ladybower 50 (11 entrants for the 20 mile race, 12 entrants for 35 miles, and 12 entrants for 50 miles). The races are run simultaneously, but finishers are only placed for their chosen distance (ie. the winner of the 50 mile race can’t collect wins for 20 and 35 miles along the way).

First to finish the 50 mile event was Stephen Pope, in a time of 07:11:33. First woman home was Steel City Strider Hannah Holiday, in a time of 09:39:24, with fellow Strider Lee Kenton hot on her heels, in 09:39:25 (Strider Peter Keats made a non competitive moral support appearance).

Full results can be found on the Rivelin Running Events website. 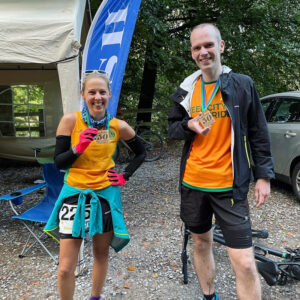 Hannah & Lee show off their medals