The Lake District Mountain Trial (LDMT) has been going since 1952 and is one of the classic events of the fell running calendar. It’s one of those races for ‘proper’ fell runners: the fabled ones who live in lonely valleys with no electricity or running water and know their way around the fells with their eyes closed. Or, as the LDMT website puts it:

“The Mountain Trial is a severe test of fellrunners’ mountaineering ability and stamina. Competitors are required to traverse difficult and often dangerous terrain, rapidly but safely. Navigational skills and route choice have a direct bearing on each competitor’s safety.”

And if that’s not enough to put you off, the participant disclaimer form leaves you in no doubt of the potential difficulty of the event. Phrases such as ‘injury or death’, ‘inherently dangerous’ and ‘vertical rock faces’ all feature in the first few lines.

I’d intended to run the English Championships fell race at Ennerdale in June, but a knee injury in the spring meant I couldn’t compete. My uncle, who lives locally, suggested I do the Mountain Trial instead. Keen to make up for the disappointment of missing the championship race, I agreed and entered before I’d had time to dwell on the many reasons not to. I’m a competent fell runner and I grew up in the Lakes, but as the event approached I started feeling terrified – runners descending the wrong side of a mountain and ending up miles from their target is a relatively frequent occurrence. At least the weather was fair; in the rain and clag it would have been a different story.

The event is run on orienteering principles. There are three courses – the short, medium and classic. I was running the medium. Runners are set off at 1 minute intervals and then have to follow a flagged route to the map collection.

For the classic and medium routes, this was about mile along the road and up a woodland trail. After collecting your map, the rest of the route is up to you, as long as you don’t enter the out of bounds areas or cross marked boundaries. The map (see below) shows a series of control points that you must visit in order. The most striking feature of this year’s map? A large prohibition typed across Crummock Water: NO SWIMMING IN THE LAKE’! 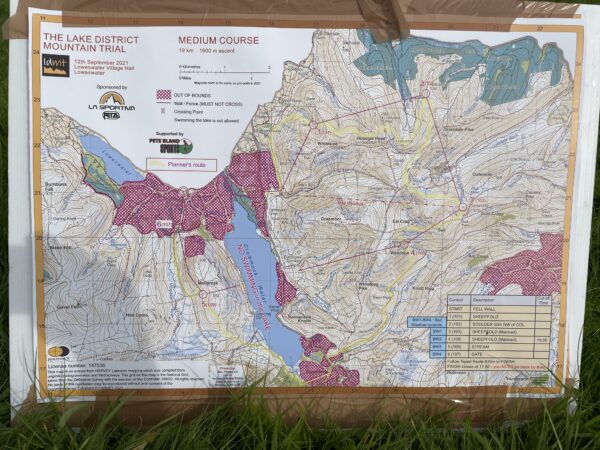 The map shows the controls and direct route (purple circles and lines) and the planners optimum route marked in yellow (you only get to see that at the finish though!).

The first control was about 4km away near the top of a gully on Whiteside. Was it better to head direct (shorter but involving more climbing) or run the longer, but easier route along the path and then straight up? The first, and probably one of the easiest, of the many route choices I had to make.

I went round the path and as I tried to follow my progress on the map I soon realised I had to adjust my sense of scale. You forget, but the Lakeland fells are just so much bigger than in the Peaks – higher, wider, steeper and rougher. Progress takes longer and things that look close on paper turn out to be far, far away.

I found the control (a sheepfold) and relaxed a little – I hadn’t got lost at the first hurdle. The next point was probably only 2km as the crow flies but, not having wings, I climbed the scree and contoured around and up to the summit of Hopegill Head. The run from the top was a rare moment of respite as I hurtled down towards Grisedale Pike and skirted more scree fields to the second control (a boulder). I was running well by now, but the odd twinge in my knee was making me nervous.

Control three took us south. The direct line would have involved a big climb over Grisedale Pike, so it was back the way I’d come followed by a long decent down into the valley and the junction of Coledale Hause. From here there was no way up except for a battle through the bracken and rocks to the third control (another sheepfold). The cool of the morning was long gone and once in the gullies, surrounded by bracken and no breeze, it was horribly humid. The climb up from the third control was the slowest of the day – an interminable, tortuous, hands-on-knees slog.

On reaching Sail Pass there was another big choice to be made – up and over the summits of Sail and Eel Crag before dropping down to the next control or straight down the path and up the stream? The descent from Eel Crag to the control looked hairy, and the thought of another 250m of climb after the all fours ascent to the pass made me opt for the latter. I planned to contour round so as not to lose too much height, but the 6 foot bracken and loose rocks the size of footballs soon defeated me. I beat my way down to the path and headed for the bottom of the gully.

The path just went on and on, dropping steeply as it rounded the hillside that towered increasingly high above. Eventually I reached the stream and hauled myself up the near vertical ascent, mainly nettles and thistles. While trying to simultaneously climb and remove the hundreds of spines piercing my hands, I cursed my stupidity at not going over the top instead.

Having found the control and dibbed in I paused to drink, thinking at least the worst was over. I had a long run down, first through the heather and scree and then along the path all the way down to Buttermere. From there it was simply a case of following the main path round the south of Crummock Water and along the side of Mellbreak. I was feeling confident about this last part, as I knew the area from doing the Saunders Mountain Marathon in 2017.

But I should have been paying attention. It wasn’t the mountains or paths or streams that confused me – it was the various car parks, campsites and pubs in Buttermere. Somehow, I managed to take the wrong footpath out of the village and ended up in a marsh on the edge of the lake instead of on the footbridge to the other side. Realising how much time I was losing, I was more than half tempted to break the rule against lake swimming instead of retracing my steps.

I lost about 15-20 minutes with that foolish detour and pushed hard once I was back on track. The temperature climbed again and I passed a number of plodding, exhausted rivals.

The final checkpoints were simple navigation wise, though the penultimate one did involve a soul-sapping trudge through the bracken, a few hundred metres directly up the side of Mellbreak before you turned round and headed straight back down.

I finished strongly, running up the final road climb, the odd pains in my knee long gone. After dibbing in at the end, I collapsed on the grass, only then realising how knackered I was. The direct line between the controls was 12 miles. I’d covered over 19 miles, and climbed 5,600ft of dreadful terrain.

Before the event I was hoping only to finish and not get horrendously lost. Watching the others drift in and their times appear on the live finishers list, I realised I’d done quite well and started getting more frustrated at my mistake in Buttermere. I finally ended up in seventh place, a result I would have leapt at before the event, but knowing I could have pushed for podium spot save for the error annoyed me just a bit!

However, I soon mellowed. Lounging on the grass, with a complimentary bowl of chilli, a large slab of sticky toffee pudding and sweet tea, watching the other runners come in, it was impossible not to feel the glow of achievement that comes after a race hard run. I chatted to Jos Naylor (who’d just finished his 52nd Mountain Trial!) and swapped race stories with other finishers. Looking at the planners route, other than my detour, I hadn’t made any appalling errors either, which was pleasing. 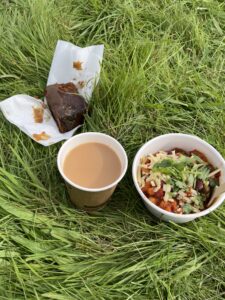 My 81-year old uncle completed the short trial (his 18th in total) in a shade over 6 hours and was soon badgering me to sign up for further adventures. I fully intend to go back and complete the classic course one day.

If you are interested you can see the routes taken by the competitors here: https://www.sportident.routegadget.co.uk/rg2/#13

Full results for all courses on the Sportident website