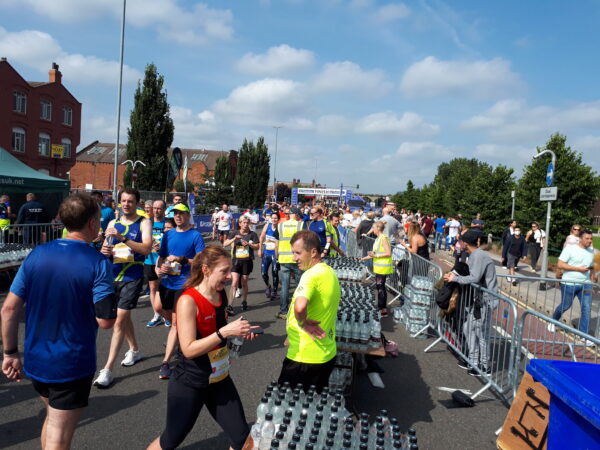 Well it was a long time coming. I signed-up for the Run For All “White Rose Double” in January 2020 (a season ticket for both Leeds and Sheffield Half Marathons) hoping to hit the streets of Leeds in April of that year, but as we all know stuff happened, and it proved not to be.

After at least 2 rearranged dates (may well be more, but I have slept since then) with my entry being transferred automatically each time, the green light was announced, Sunday 5th September 2021 was to be the day.

I should add this was to be my fourth running of the race, I have completed the previous 3 events (well the 3 that actually took part anyway), and achieved my half marathon P.B. on the course, so I have a soft spot for it.

The obvious selling point of the race to me was that it was so easy to get to. Parking the car is always a challenge at these city races, so being able to get there on public transport is always a bonus (and spares the expense of a hotel room). I usually take the National Express coach service which usually arrives at a reasonable time, however I could only get a seat on the 4:40 service from Sheffield, so an early start beckoned.

The 2021 race differed from the previous years in that it was sharing part of the course with the Leeds 10k (which was to be run just before) and the start was to be moved a few blocks from the old marshalling area in Millennium Square, to the area around the Arena (to permit better social distancing no doubt).

The start area was well-managed with starters heading-off in four waves (plus the wheelchair race up in front). The Arena itself provided toilet facilities and queues were far better than many events I have experienced. Baggage was to be stored on lorry trailers, to be transported to the finish.

After forming-up in waves there was the obligatory warm-up, and whilst not fully-observing social distancing, there wasn’t the same level of over-exuberant waving and stepping which always seemed to be such a part of starts pre-COVID.

From the start we headed north out of the city and joined the traditional Leeds Half route, up a few inclines on mostly closed roads, when we got to the Ring Road we had a coned-off lane for the runners, with cars on the other side.

At about the halfway point (just outside Weetwood) there are a couple of decent downhill sections where you can really let fly and make-up time lost on the uphill parts.

At about 8 miles the route changed from the usual route by heading north west (skirting the boundaries of Horsforth) up an incline, round a few cones and then sent back in the other direction on the other side of the road to them “enjoying” the up-hill stretch.

This marks the start of the 4 mile(ish) “home straight” (past Kirkstall Abbey) to the finish line (now vacated by the 10K-ers).

Once over the line you pick up your goody bag (I’ve had better), bottle of water, a, what some loosely refer to as a beer, but re-branded by the manufacturer as an “isotonic drink”, reclaim your baggage from the truck, and then your time’s your own.

E-mails have gone out to say that the next running of the race (in 2022) will return to the usual route, so the Horsforth two-way traffic will be consigned to history and runners will then continue past the 2021 finish area on Kirkstall Road and then back into the city centre for a finish a few yards from where you started (near Millennium Square again).

In general I am happy to recommend this race. There is good support from the locals (ensuring a good atmosphere), 4 well-stocked water stations on the route (with the occasional energy gel), a fairly diverse (mostly urban) set of undulating scenery, and all-in-all a good day-out.

As for my 2021 race (or 2020 if the medal is to be believed), lightning was not destined to strike twice, I missed out on a P.B. by a few minutes, finishing in just under 2 hours.

The race was won by John Birch (Hallanshire Harriers) in 1:09:38 and Clare Slorach of Hyde Park Harriers in 1:27:13. Three athletes were classed as non-binary, first among whom was Ryan Dennis of Rothwell Harriers in 1:24:56.