Official race information states “Starting and finishing in front of the beautiful Prestwold Hall the course will head out onto the surrounding closed roads, including a loop of the race track. This course gives you the opportunity to take in the rural surroundings on traffic free roads!”  The race includes the former Wymeswold Airfield but what is not stated is that this is now filled by the largest solar farm in the UK. These are now certainly a common feature of rural surroundings but this must still go in the book of “Strange Race Venues”. 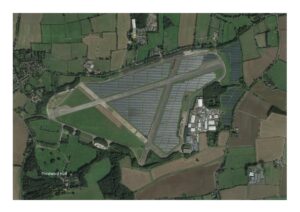 Phil Cooper was the only Strider to compete in this event coming home in third place with a stunning pb of 72:17 breaking his previous best of 72:54 set back in 2015. Phil first joined Striders in 2009 leaving for pastures new a few years later but returning to the fold last year thus bucking an apparent recent trend. 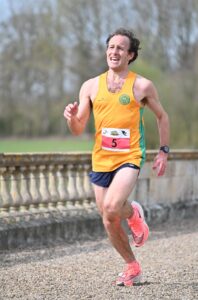 Phil Cooper heading for the line, expression demonstrating that Nike Zoom Alphafly Next% also require some effort to drive them.

Full Results Leicestershire Half Marathon like other recent post-lockdown races show numerous pb’s. In the old days, the cynic would have simply said “short course” or is this the effect of lockdown: training more as there’s nothing else to do or not over-training as the impetus just hasn’t been there? Or is it really the shoes?