It’s early October and autumn is just kicking in after around a year and a half of lockdown. Races are opening up again. Two striders, Nancy Stuart and Richard Pegg, took the long journey north to the highlands for the Loch Ness running festival. Peggy had entered the marathon and Nance had entered the 10k. Several striders have made the long trip before for a very enjoyable event.

First stop north, on the Friday night, was Perth (St Johnstone for football lovers). Originally the plan was to stop at Leith. However, this needed changing when it was reminded that Scottish Parkruns begin at 9.30am making the chance of getting to Inverness to pick up the marathon number virtually impossible.

Perth is worth a visit, especially for a great parkrun. Single loop, flat and very scenic. The only oddity in Perth is the train station which makes connecting between platforms a work of art. One traveller on the station remarked “strangest station in the UK”. Note more walking is now being made than originally thought. Perth is also the birthplace of John Buchan the writer of the 39 Steps. More on steps later!

The train journey from Perth to Inverness is a real treat, taking in some great scenery plus very comfortable trains (unlike Cross Country!). At Inverness there was a quick stop to purchase a disposable jacket from a charity shop. More on the need for this later. After, it was a taxi out to the BnB out near the 10k start line. It was becoming obvious that there is virtually no public transport to the suburbs south of the city. Once the bags were deposited at the BnB it was a 30 minute hike to the Expo for race numbers, a bit of shopping and the obligatory picture with Nessie. After that a hike back to the digs. Luckily there was a decent restaurant near the digs. However, as you can now gather our striders have not just covered “39 steps”, they have covered 30k steps each!!

The 10k has a relatively tough uphill start before heading down into the city and an enjoyable finish (perhaps marred by the fact that before crossing the bridge to come back up the River Ness the finishing straight is seen). Nancy had an enjoyable run finishing in 59.35, breaking the 1 hour barrier that had eluded her in recent months.

The marathon does have an unique start. Buses transport runners out to the end of the Loch in the early hours of the morning. Then there is a shivering 30 minutes in what seem sub-zero temperatures waiting for 10 o’clock and the obligatory piper to start runners off. This is where the charity clothes are needed. There are drop off points where the disposed clothes are collected and taken back to the charity shops again!! No points for guessing which Proclaimers song accompanied the start.

The run is one way through fantastic countryside on very good roads back to the city. There are a couple of nasty hills. Peggy finished in just over 4 hours, slower than before but happy as this was a long run before Rotterdam several weeks later. Another strider, Mick Brogan , ran the race in 4.08.57. Looking at the splits, Mick had a cracking first half which he could not maintain. Unfortunately the 2 strider groups missed each other at the finish. At the finish there is the complimentary Baxter’s soup and a roll. In previous years there has been drinking, eating and merriment in a large tent. Unfortunately, in post covid times, this has not been reinstated.

The next day Peggy and Nancy enjoyed a brief tour of around Inverness before heading back south. Both tired but happy they had enjoyed the races. It is a great part of the world. Disappointingly, Nessie was not around though. A recommended race festival well worth the trip north. Next time though digs nearer the start and significantly less walking on the Saturday is highly recommended! 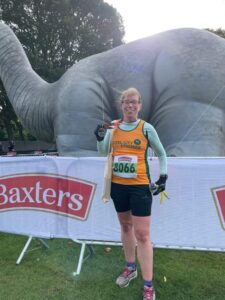 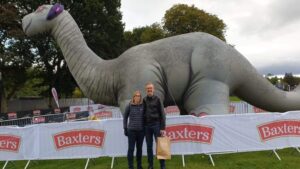