On a cold early Sunday morning I set off to complete a challenge that ought to have been completed last year. The pandemic has delayed most races last year including this one. I, like many others, have not known whether or when the restrictions were going to be lifted. Around January/February a confirmation email was sent to confirm the Longhorn was on.

Arriving at the site, temperature was checked, sanitisers to be used before entering. Longhorn is set in Thoresby Park, throughout the day different races were run, ranging from 5K to 60K, plus canicross and Nordic walkers!  Due to the amount of entrants all races were staggered starts.

I spoke with several people .. the general consensus was that as confirmation was at short notice not everybody felt they’d trained enough. Not just me then! No Striders get together or photoshoot.

I had opted last year for the 50k ultra, missed the deadline to amend and change it this year to a half marathon. Places couldn’t be deferred until next year. So I found myself at the start line ready to complete 5 x 10k loops. The half marathon and marathon runners had a slightly different route but our paths crossed from time to time.

Setting off was on a tarmac path for half a mile that led up to the woods, that became mostly trail route at this point, the path alternated between fields and woods and is fairly flattish. There was a short section of sand and when the sun came out later, certain paths became very dusty. You got to know that when you came to the lake you were nearly at the end of another lap.

There was very little in terms of nibbles at stations, water was provided but we had be forewarned to take our own foodstuffs to see us on our way. This is something I’m not used to, previous ultras have always provided snacks. But a baggage area on route for you to leave your goodies was available for you to fuel up. The lack of nosh was made up by the number of marshals supporting, clapping and cheering you on, music was played at mile 2, (the first station) which then became mile 8, 14 etc. The portacabins had volunteers cleaning every time used. Brilliant.

The scenery is great out at Thoresby, the Hall in sight every now and again, and speaking to another runner it appears that I missed the ‘dancing’ deer at the start of the run, a superb sight apparently.  The weather held out and in the main was – unusually – good running weather.

I struggled from lap 4 but knowing that the next lap was to be my last I plodded on.  It was good that I followed another strider over the finish line, though he had just completed 6 laps! – well done.

I came in after a gruelling 5hours and 32 mins. The medals are great. I’m really pleased that I managed to pull this one off, after having a foot procedure and being off my feet for 3 months with strict instructions not to run until February, it gave me only 9 weeks to train.

The run was well organised, volunteers/staff helpful and I think I would recommend this as a venue.

Congratulations to all participants and for representing our club in such strong numbers! 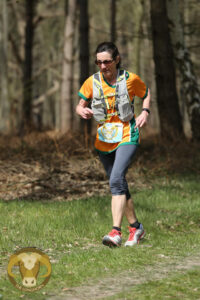