This race has a nice respectable start time of 10:30.  The best thing about that is that by the time you’ve finished running, it’s officially beer time!  The beer tent is tantalisingly placed opposite the finish, and by the time you’ve run the last 300 or so metres UP the tussocky field to the finish, you’ve definitely earned that beer.   Anyway, let me set the scene…
It was a warm morning and the midges were out in full force in the upper car park, but thankfully had dispersed somewhat by the time we reached the registration area in the lower field.  There was a great country atmosphere, with a mix of farmers, sheepdogs, fell runners, marshals and officials, with the obligatory marquee selling country fare such as jam and cake and beer.  It also housed the trophies for the race and the trials.
There was just a small ‘gaggle’ of Striders and ex-Striders.  I initially had a chat with the lovely Jill Davies (in Totley green) and then Craig Baird (now HRRC), before several green and gold shirts came on-scene.
There was no kit requirement, but I did check that Lee Mills was fully dressed for the occasion, as he’s proved over time that he needs assistance – and sometimes interventions – with this.  On the other end of the scale was Joe Buckman.  Not only was Joe fully and appropriately dressed, but he’d taken his FRA kit to another level.  His mum would have been proud, is all I will say.
After a short warm up around the lower field, we were gathered at the start and then off we went.
The route took us along the upper path on Burbage Edge, which just seemed to go up and up for a long time, before we eventually turned west for a nice run over to the base of Carl Walk, and the next ascent.  It was here that my problems started, as first I grazed my knee by skimming a high rock, and then my shoelace came undone.
I knew when I was tying it that I needed to do it properly or it’d come undone again, but in the heat of the race I did a bodge job, and it came undone again after another mile or so.  I re-overtook a couple of the runners who’d passed me, but after the second ‘undo’, Lee came past and I wouldn’t overtake him again (him falling over was the only chance I had, I’d thought, but this was to be one of the rare occasions Lee stayed upright!).
The route then took us onto Owler Tor and then back down to the ice-cream van – shortly before which my OTHER shoelace came undone – before the final slog to the finish.  I didn’t bother fastening my lace this time and just managed to hold onto my shoe.
It’s a nice race – and quite a good one for spectators as you can view the runners on the vast majority of the course (and runners can always see the finish).
We grabbed ourselves some beer and hung around to watch the prize giving, and the super-speedy Rachel Thorley taking third lady
All in all, a great way to start the weekend!

178 runners completed the event including 7 Steel City Striders
The winner of the race was Steve Franklin of Totley AC in 42:02
First female was Katie Walshaw of Holmefirth Harriers in 46:18

Special mention to 3rd female which was Steel City Striders Rachel Thorley in 51:00

Well done to the 7 striders competing. Results below: 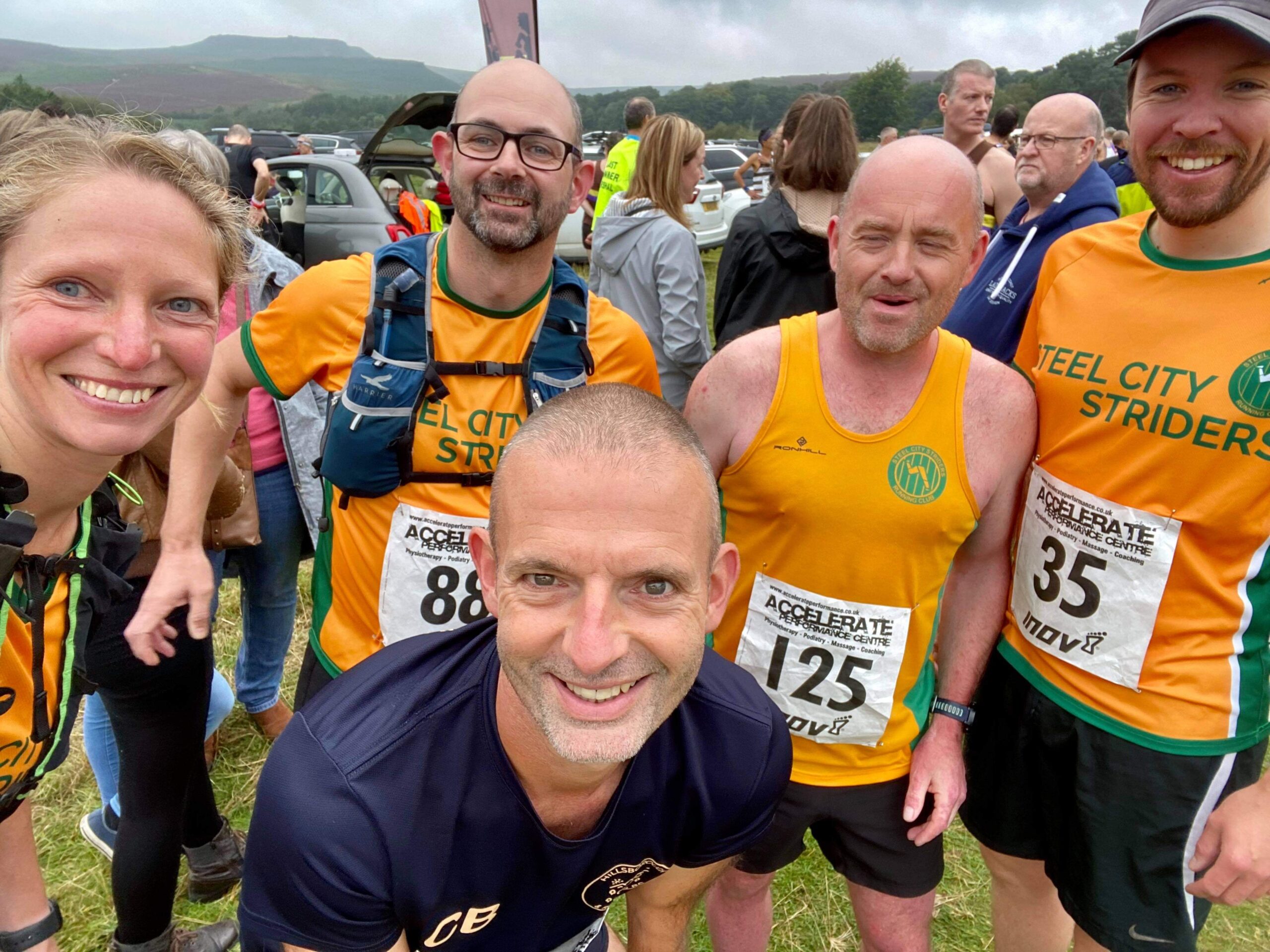