Kudos to the ten Striders who donned the vest and headed to Redcar to represent the club in this year’s autumn edition of the Northern Road Relays. Victory may have eluded us again, but rubbing shoulders and jostling elbows with athletes of the quality that you find at these events always inspires, and often draws out performances you didn’t realise you were capable of. They’re always worth the trip.

As the 2pm race start approached, our various car-loads of runners converged on a picturesque spot in the shadow of a row of toilets by the call-up area. The club tent, located in a panic the evening before, came out of its bag but remained flat on the grass for the duration of the event. The club flag flew proudly beside it. This wasn’t a metaphor for failure or a job half done; it was a symbol of what running is about: pride taking priority over comfort. Who needs rest when there’s a race to run? Who needs a tent when you have a flag?

The course was a dead straight 6k out-and-back along the sea-front offering nowhere to hide. There was a breeze that came and went, but you’d have needed a spirit level to find an incline. No excuses really, a true test of what you’d got on the day.

Perhaps the weather was a little on the hot side, but the organisers had laid on some sea so that over-heated runners could cool down with a post-race swim. You have to respect that level of service.

Special mentions for some who conspicuously aced the test:

Great running and superb commitment from everyone. Well done to all for mixing it with the best in the North and doing us proud.

5k equivalents based on Riegel’s formula and a distance of 6k. Full women’s results are here.

5k equivalents based on Riegel’s formula and a distance of 6k. Full men’s results are here. 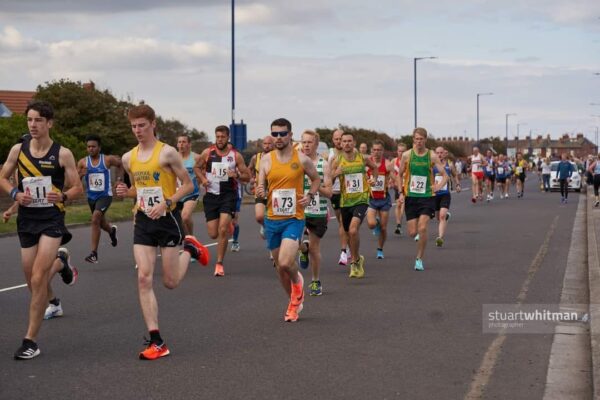