It’s a sign of the times, that travelling from Sheffield, towards Norton, somewhere between Doncaster and Pontefract, on a showery August Sunday morning, should elicit such a sense of anticipation and a little nervousness.

The Norton 9 is one of three races that Askern DRC offers each year (as well as a 10 miler and a flat and fast 10km race). It normally takes place in March and for a number of the assembled runners it was the first event post-COVID disruption, but also the last, so provided a good opportunity to gauge the impact of the last 14 months (good or bad). The club website describes the race as a rural, undulating course, on quiet roads.

It was good to see lots of old faces before the start, both within and outside of the club. Less welcome was the sharp shower just before the 10.30 start, which had most of us diving for any available shelter before the race began. The rain also seemed to have affected Keith Binney’s starter pistol; after two failed attempts to start the race with the gun, he had to resort to a whistle, much to the amusement of the assembled field. Keith seemed less amused. 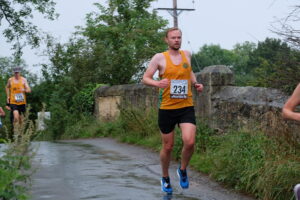