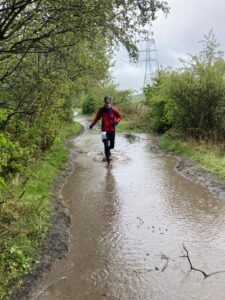 This event, organised by It’s Grim up North Running, lived up to its name by being held in horrendous conditions: The rain was torrential from start to finish. It was advertised as a trail race but with half of each lap on a grassy path which quickly deteriorated, and a net climb of 800 feet, it turned out to be more like a X-Country race and was a really gruelling run.

The venue for the race, Rabbit Ings Country Park near Royston on the border with West Yorkshire, is the site of the former colliery yard and spoil heap of the Monkton Colliery and then the Royston Drift Mine, the latter of which closed in 1989. The Country Park was opened in 2011 and is a real hidden secret.

Competitors were registered for one of an ultra, a marathon, a 20, 15, 10 or 5 mile race that determined how many 5 mile laps they completed (plus an extra bit for the marathon runners) so for me and Sarah it was three laps and for Laura it was 2 laps. We were set off in waves of 6 to meet the current Covid restrictions.

I think that this was probably the worst conditions I have ever raced in. Given also that it was back in the last millennium when I last did a race of this distance I was delighted to finish in a respectable time. Thanks go to Sarah for running the race with me; it’s so much easier than running solo in a race.

The post race cakes were home made, free and fabulous. The organisation of the event was excellent and a special thank you to all the marshals out on the course for four or more hours who, unlike the runners, had little chance to get warm. 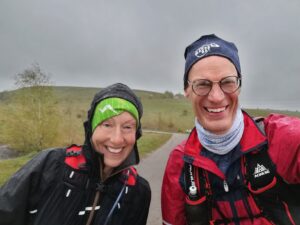